Singapore: MOVE over, guys, women-only gyms are getting bigger and better. Amore Fitness, which has 16 outlets islandwide, is planning to open a new 1,393 sq m fitness centre at City Square Mall at the end of the year.

Gyms like Amore not only have fitness regimes and classes tailored for a woman's physique, but also have less bulky fitness equipment and luxurious vanity areas where members can primp and preen after their workouts.

Director Karine Gauthier, 34, said the rise of women-only gyms stems from the fact that women 'appreciate privacy and want to feel less intimidated when they work out'. 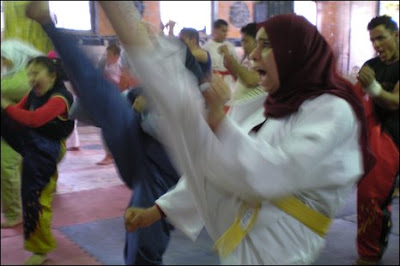 UK: A NEWLY opened ladies-only gym is offering a package of exercise with nutritional advice.
Smeara Ahmed and sister-in-law Farzana Majeed took on the site of former gym Body Flex, which went into administration, and opened up their own Body Bliss venture.

It is based at the former Calder Work-shops in Gibbet Street, Halifax.

Smeara was already a trained gym instructor and nutritionist and is now also training as a personal trainer.

She and Farzana agreed to take on an apprentice through CMS Vocational Training Ltd in Huddersfield in return for funding to give further training to their instructors.

And working with NHS Calderdale the gym is offering a weight management scheme to members.

With already more than 200 members, aged from 18 to 65, Body Bliss is aimed at encouraging more women to lead healthier lifestyles.

"It's a massive gym and everyone is really impressed with it," said Smeara.

"Often women feel intimidated in a mixed environment so this is a secure gym for them, run by women.

"Our instructors work closely with the ladies.

"Members are saying they really appreciate the nutrition side as a lot of people don't know what to do apart from exercise."

The gym has been fitted out with new equipment and rooms, including an aerobics studio and a sauna and steam room.


USA: Over the past four years that she has owned the Club for Women in north Phoenix, JoAnn Mullooly has noticed an increasing number of Muslim and Orthodox Jewish clients who want to work out among women exclusively in order to preserve modesty.

"I've definitely seen an increase," she says, attributing it to word of mouth in the community. "And we try to be conscious of it."

She estimates that 10 percent of the 1,700 members are Muslim and 10 percent are Orthodox Jewish. Some work out fully veiled, and some change into modest workout clothes.

There are no statistics that chart the number of Muslim or Orthodox Jewish women clients at fitness centers, but this population's eagerness to work out away from men seems clear:

• In 2006, Fitness USA agreed to place a divider and frosted glass in its Lincoln Park, Mich., gym to ensure gender separation. The move came after 200 Muslim members of Fitness USA signed a petition saying that the company reneged on a promise to maintain gender separation at that facility.

• Last year, Harvard University agreed to set aside women-only hours at one of its fitness centers for students after Muslim women pleaded their case.

• Curves for Women gyms, a fast-growing franchise in the United States, has rapidly expanded into the Middle East, with more than two dozen facilities in Israel, Egypt, Lebanon, Kuwait, Jordan, Saudi Arabia, Turkey and Qatar opening in the past two years, according to Becky Frusher, head of corporate communications for Curves.

"We are especially proud of being in those countries where opportunities for women are not as plentiful as elsewhere, both for working out and for women owning a business," she says.

Mullooly says she helps to maintain a women-only atmosphere at the club, which also has a pool, by stopping all male visitors at the front desk and by scheduling repairs by workmen after hours.

Kneha Khawaja, 46, of Phoenix, is a Muslim who dresses modestly but does not wear a veil. She has worked out at the Club for Women for four years, preferring kickboxing.

"You don't have to worry about who will be watching you work out here," she says.

Devora Krischer of Phoenix used to live in New York.

"As an observant Jew I wear long sleeves and long skirts. I don't wear pants, and I cover my hair," she says. "I could not work out in a coed gym. In Brooklyn, they have separate gyms for men and women."

Since working out at the Club for Women for several years, she has lost about 30 pounds.

Krischer says the single-sex atmosphere appeals to all types of women, not just those whose religion calls for it.

"I see women exercising there who would never ever think of setting foot into a coed gym, especially older ladies," she says.

A 2008 study by Temple University found that feeling self-conscious about appearance was one of the strongest barriers to obese women working out at gyms.

Mullooly says about 25 percent of the gym's clients are Latina, many of whom follow customs of modesty.

Sandra Eckman, 40, of Phoenix, is originally from Mexico, and she also enjoys the women-only atmosphere.

"I feel comfortable being there around all the girls, and my husband is all for it," she says. "I go and have fun and little by little lose the pounds."
Posted by Zafar Khan at 10:01