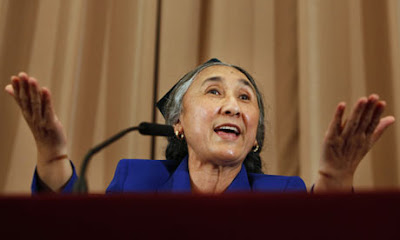 Rebiya Kadeer, the exiled Uighur leader, claimed that almost 10,000 Uighurs had "disappeared" during ethnic unrest in China's north-western region of Xinjiang earlier this month and called on the international community to launch an inquiry.

Speaking during a controversial visit to Japan, Kadeer said Chinese authorities had used undercover "snatch squads" to target Uighurs during clashes between Uighur and Han Chinese in the city of Urumqi on 5 July.

"Almost 10,000 people attending the protests in Urumqi disappeared in one night," Kadeer, president of the pro-independence World Uighur Congress, said. "Where did they go? If they died, where are their bodies? If they were detained, where are they being held?"

It was unclear where Kadeer got her numbers from.

The state news agency, Xinhua, said today that authorities in western China had arrested 253 more people suspected of being involved in the violence in Urumqi, in addition to the 1,434 detained earlier over suspected involvement in the 5 July riot. There are no details of the ethnicity of suspects.

The violence began after police attempted to break up a peaceful protest against the killings days earlier of two Uighur workers by Han Chinese colleagues at a factory in Guangdong, southern China.

At least 197 people died – including 137 Han and 46 Uighurs – and 1,800 others were injured in the worst ethnic violence China has seen for decades.

China has accused Kadeer, 62, of inciting the riots and warned Japan that her visit could damage bilateral ties.