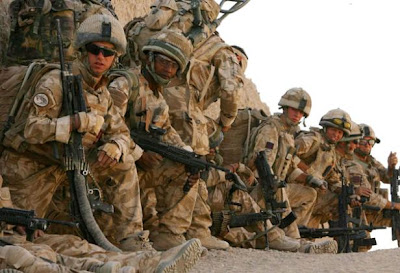 In the first ever unauthorised dispatch from an officer on the frontline, one young Captain offers a brutally honest account of life in Afghanistan, revealing the pain of losing comrades, the frustration at the lack of equipment, and the sense that the conflict seems unending and, at times, unwinnable

My motivation is simple. Writing this helps vent off some of the frustration at what is happening out here in Afghanistan to those serving in the British Army, where death and serious injury are sickeningly common occurrences.

Before coming here, I had done two tours in Iraq which saw fierce fighting against the enemy. But, sometimes out here I feel I might as well be on my first tour, as a novice second lieutenant instead of a so-called senior captain with over eight years experience in the Army, due to a shocking rate of attrition that I have never encountered before.

Commentators keep citing previous figures for casualty rates in the Falkland's conflict, as well as the years in Northern Ireland, suggesting that, spread over the time we have been in Afghanistan, the figures here are not that bad.

How reassuring. For a moment I thought the rates might be quite bad; but thank goodness I have been shown that what we are experiencing is in fact a tolerable "medium" number of casualties.

Can we really only analyse the death and injury rate, or view it as a cause for concern, once we get past a certain benchmark or once the average number outstrips a previous average? I had hoped that human progression was a bit more advanced than that, and that there might be more to the situation than a comparison of statistics.

Then there are the injuries. I am talking about limbs removed, double or even triple amputations, on a scale that we've never seen before.

When you read about a "very seriously injured" casualty, that person's life is never going to be the same, nor is it for the rest of their family, who will be sucked in and forever affected by the aftermath.

So what effect does this have on us all out in Afghanistan? My experience of this is from the 1st Battalion Welsh Guard's Battle Group, who have endured a significant number of fatalities and seriously injured personnel, including the death of their commanding officer.

With each death I think each of us experiences a feeling of total shock, powerlessness and impotence. Within your mind you feel you have to do something, especially if you knew the individual. Back at home that might be to jump in the car and drive to some secluded spot where you can get out and scream at the top of your lungs to let out all the anguish. But here nothing of the sort is possible. You are all enclosed within your camp or patrol base; there is no refuge, no private corner to go to, to deal with your grief.

Around you everything else has to continue, and cannot stop. The radios still have to be manned and answered, the patrols still have to be planned, the convoys have to be organised. It is not as if you can take a day off to deal with the grief, to come to terms with it. And even if you could, what good would that do?

Who wants to go and sit in their tent, sweating in temperatures in the high 40s, brooding on the possibilities: what were they thinking in those last few moments, did they know what had happened, did they know they were dying, how terrified and alone did they feel?

The only option available is to embrace the alternative: keep joking with your friends, maintain the banter levels, swapping smutty jokes and stories – literally forcing yourself to keep smiling.

I do not say that as a praiseworthy example of that renowned, age-old, plucky, English stiff upper lip. Far from it – it may be our worst enemy.

After death, life obviously has to go on, but I have always felt that life should go on having learnt a lesson from that death, improving your life as a testament to that life robbed – not merely moving on with a smile, whilst showing "fortitude".

I am just speaking for those of us who deal with the deaths and injuries in Afghanistan indirectly, as an explosion in the distance, followed by a report on the radio, then a helicopter coming in to pick up the casualty.

As for those who deal directly with the deaths and injuries, who have to go into the Viking vehicles after the explosion to pull out the casualties, who have to tourniquet the remaining stumps after both the legs of a person have been blown off, those who have to pick up the leftover pulpy fragments of a disintegrated body and put them into a bag, I am not sure how they react.

I would imagine in a similar way to the rest of us: you put it aside as soon as you can, as there is nothing to be achieved in thinking about it. All you will do is think yourself into a corner, where you are faced with the absurdity and horrid waste of it all. And if you let that take a hold, how are you meant to perform, drag yourself out of your tent at 4am after just three hours sleep, to go on another foot patrol, another 18-hour convoy, another 12-hour shift in the operations room? It does not work.

There is so much that still needs to be done, there are still weeks to get through, more patrols and convoys that need to be completed. So the event of each death is placed away, zipped up in a mental body bag, back in the recesses of your mind.

However, unlike a real body bag, which fortunately disappears, that mental body bag remains in the morgue of your sub-conscious, quite possibly to come out and be re-opened, once you return home and have the chance to think about each death, each injury, each friend gone.

Then there are the equipment shortages. Due to the pitiful numbers of support helicopters and Apaches needed to escort them, every day troops on the ground are forced to expend an enormous amount of hours and manpower just standing still. They sacrifice their reserves of energy, motivation and willpower securing and picketing routes for the never-ending vehicle convoys that have to keep happening in order to resupply the patchy spread of patrol bases with water, ammo and rations; as well as recovering the vehicles that invariably go into ditches and securing helicopter landing-sites for the evacuation of casualties from improvised explosive device strikes.

I think if Sisyphus (the Greek mythological character cursed to roll a huge boulder repeatedly up a hill, only to watch it roll back down again, throughout eternity) could see us now, he would offer his sincere condolences and offer a friendly arm around the shoulder, saying that he knew what it felt like.

If someone provided one of those garishly coloured (army) pie charts depicting the percentage of time and effort sucked up into the black hole of orchestrating these road moves, it would provide a statistic that would be both shocking and embarrassing. It might also partly explain why the military is struggling to gain an advantage over the Taliban and cannot hold a significant amount of ground. Its energy, time and focus is bound up with those road moves, and our most vital asset, our troops, are either sweating on the sides of the roads, securing them, or sweating inside the vehicles of those often doomed convoys. I am not criticising the military on the ground, who have to deal with this dilemma. Everyone seems to already agree on this issue of the equipment, in particular the lack of support helicopters – which rather begs the question of how on earth is nothing done about it? And how does the fact that nothing gets done about it seem to be the status quo and keeps occurring year after year, budgetary policy after budgetary policy, operational tour after operational tour? If a magic genie were to appear in front of my eyes, who in keeping with the spirit of the present credit crunch cutbacks, could afford to grant me just one wish, I think I would simply choose a massive increase in helicopters and pilots – a wish that would have such a crucial influence on what is happening to the British Army out here.

We are dealing here with a tenacious and stubborn enemy. Despite our dropping bombs on compounds that the enemy is using as firing-points, the very next day, new enemy fighters are back.

On the one hand, perhaps the enemy command is so feared, authoritative and manipulative that they force unwilling fighters into those compounds as pure cannon fodder. On the other, perhaps, the fighters willingly go back, despite their comrades having been killed there, so strong is their faith in an afterlife, or so strong is their belief in the jihad they are fighting.

Whatever the reason, they come back undaunted to the same firing-points, despite our overwhelming fire power. Their numbers seem to stay constant, as opposed to decreasing – all of which gives a strong indication that we will not be able to reduce their numbers to a level where they are tactically defeated.

It seems increasingly true that a stable Afghanistan will only be possible with some sort of agreement, involvement or power-sharing deal with the Taliban.

However, as the British Army units here are increasingly sucked into the turmoil of the latest "fighting season" there seems little evidence that anything is happening on the political and diplomatic stage. In the meantime, tour follows tour, during which the most intense fighting appears to achieve not much more than extremely effectively inflicting casualties on both sides, whilst Afghanistan remains the sick man of Central Asia.

I think of a scene near the end of Pat Barker's novel The Ghost Road, set at the end of the First World War, in which a seriously injured soldier lies in hospital, gradually dying. The soldier regains consciousness but due to his injuries can only slur a sentence together, which he keeps repeating. His family agonisingly try to decipher what he might be saying, which sounds like "shotvarfet, shotvarfet". His doctor realises what he is trying to say and translates: "He's saying, 'It's not worth it' ."

The man's father, a retired Army major, in grief blurts out: "Oh, it is worth it, it is."

This incredibly powerful passage goes some way to articulating our response to this conflict. We seem to know and say that it is not worth it, whilst instinctively reacting and saying that it is worth it – it has to be worth it. If I am honest, I do not know what I think about it all conclusively; my reasoning is lost in the storm of media, opinions, analysis that are at play here.

However, I know that no matter how hard I try to see through the clutter of opinions and utter something of my own in order to explain or justify what I'm involved in, I just cannot shake off that nagging, repetitive voice in my head that says "shotvarfet, shotvarfet".