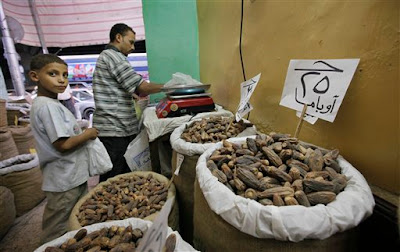 In this photo taken Wednesday, Aug. 19, 2009, a sign in Arabic reading "Obama, 25 pounds", indicates the price of top-quality dates as 25 Egyptian pounds (US$ 4.5) per kilogram, at a spices shop in downtown Cairo, Egypt. Ahead of the holy month of Ramadan, fruit sellers in Egypt's sprawling capital have named their best dates this year after President Barack Obama, in a sweet tribute to the American leader and a gesture of appreciation for his outreach to the Muslim world. (AP Photo/Ben Curtis)

Following President Barack Obama’s message to the Muslim world, Egyptian fruit sellers have taken on the friendly gesture to name their best dates of the year after the President.

"We love Obama and so we named our best dates for him…we put a sweet date in Mr. Obama's mouth and a message in his ear…please help to bring peace to the world. We have a lot of hope in you." (Aif Hashim, shop owner, Cairo).

Dates are a traditional food for Ramadan — which begins Saturday in most of the Islamic world — since the Prophet Muhammad is said to have used them to break the month's sunrise-to-sunset fast each evening.

In Egypt, shops have created a new tradition of naming their best and worst dates to catch attention and boost sales — giving a little reflection of the political mood.

Obama's vault to the top of the Egyptian date-scale comes after he delivered a landmark address in Cairo in June, saying he wants to improve American ties with Muslims around the world. Those ties were deeply strained under his predecessor, George W. Bush, who was widely resented in the Arab world — and whose name was given to the worst quality dates in Egypt in past Ramadans.

"We love Obama and so we named our best dates for him," said Atif Hashim at his busy shop in downtown Cairo.

Huge barrels in his shop were piled with "Obama" dates, selling for just under $2.50 a pound ($5 a kilogram). For an additional dollar, there is an even better date, labeled on a sign as "Super Obama."

"We put a sweet date in Mr. Obama's mouth and a message in his ear," Hashim said. "Please help to bring peace to the world. We have a lot of hope in you."

Hashim named his poorer dates after Israeli Foreign Minister Avidgor Lieberman, a hard-liner who is particularly disliked in Egypt for once saying its president, Hosni Mubarak, can "go to hell."

Other low-quality dates were named after Lieberman's predecessor, Tzipi Livni, and after Bush. They all go for about 17 cents a pound (36 cents a kilogram).

In 2006, many sellers in Egypt named their best dates after the leader of the Lebanese militant group Hezbollah, Hassan Nasrallah, whose popularity soared among Arabs because his militants battled Israel in a devastating war that summer.

Hundreds of labourers are busy loading trucks with dates in the small town of Khairpur, 40km north of Karachi, to meet the growing demand during the holy fasting month of Ramadan.

“Dates trading reaches at its zenith before and during Ramadan as every one wants to break fasting with dates in line with the saying of noble Prophet Muhammad (be and blessing be upon him),” Mohammad Bahsir Mahar, president of the dates market association, told IslamOnline.net.

“We do not go to homes even at nights on the eve of Ramadan as trading continues day and night to met the higher demands.”

Locally known as Khajji or Khajoor, dates see a heavy demand during the dawn-to-dusk fasting month.

This year, Pakistan has produced 600,000 tonnes of dates for local consumption and exports.

“We have got abundant crop (dates) this year, but still we are facing difficulties in meeting the demand for Ramadan,” said Mahar.

Pakistan’s south-eastern and north-eastern areas are the country’s best places for cultivating dates for their rich soil and abundant sunshine.

Long queues of dates trees are a normal scene across the road from Khairpur to northeast Pakistan.

There are more than 300 varieties of dates in Pakistan, such as Karbalaee, Aseel, and Madni.

There are also Dokka (hard yellow date), Chohara (dried dates), and Dung (half date and half dokka), which see a high demand during the holy fasting month.

Ahead of the start of the fasting month, dates exhibitions become a normal scene across Pakistan.

“We receive most of the orders at these exhibitions,” said Mahar.

“Not only in Ramadan, but besides that, India is a major buyer of Pakistani dates. Not merely Muslims, but Hindus too use dates in their ritual ceremonies.

“It’s (India) a heavily populated country, with a huge Muslim population, and cannot meet the (dates) demand of its people during Ramadan and on the occasion of different Hindu festivals, wherein dates, and other by-products are essential items.”

The booming of dates trading during Ramadan provides an additional source of income for hundreds of thousands of Pakistanis.

Hundreds of female workers could be seen sprawling dates on huge straw mats as their male colleagues collect dates from the trees.

Hundreds of Pakistanis could be seen gathering around stalls and handcarts carrying dates parked outside mosques, offices, intersections and bus and railway stations.

“Every year (during Ramadan) I set up this stall to earn additional income to meet my `Eid expenses,” said Khushal Khan, a peon at a local company, who sells dates at a small stall outside a Mosque in Saddar, the downtown of southern port city of Karachi.

“By the grace of Allah, I earn a sufficient amount to meet expenses on `Eid-ul-fitr.”