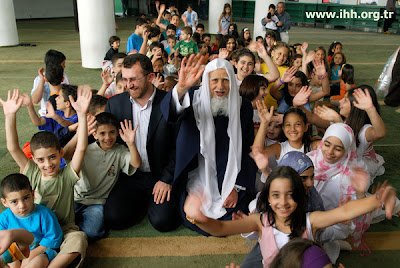 Every Ramadan, Zubaida Jomaa, 44, struggles to bring her family together at least once a week for breaking their fast together.

“I like to see my family sitting together during the holy month,” Zubaida, of Lebanese origin, told IslamOnline.net on Saturday, August 29.

“It gives me the sensation that Islam is constantly inside my home.”

The mother of two feels a special joy when she invites relatives and neighbours to iftar during the dawn-to-dusk fasting month.

“Relatives are used to come to break fast with us and even some Brazilian relatives from my mother’s Brazilian’s side, who even without fasting are happy to share with me this so special moment of our lives.”

Despite living in a western society, the Muslim woman is keen to teach her kids the meaning of fasting during Ramadan.

“My children are fasting since they were nine-year-old and despite people around me condemning my attitude for letting children fast, I know that what I have done is seen with good eyes by any Muslim family,” said Zubaida, who was raised in Brazil.

Muslims dedicate their time during the holy fasting month to become closer to Allah through prayer, self-restraint and good deeds.

It is customary for Muslims to spend part of the days during Ramadan studying the Noble Qur'an.

“Ramadan is a blessed moment in the life of any Muslim worldwide,” said Zubaida.

The Muslim woman is also keen on passing on the Arabic gastronomy to her children.

“During common days I don’t dedicate to the Arabic culinary as I do during Ramadan,” Zubaida said.

“I feel that we should keep as close as possible to everything around our culture and religion.”

In Brazil, families can easily find Arabic condiments with variety and at affordable prices.

“Even being born in Brazil, I have my heart close to any Arabic culture,” said Zubaida.

“Islam moves my life and Ramadan is the moment I get blessed for all that.”

There are a growing number of Muslim families in Brazil who are keen on observing the Ramadan traditions.

“We have observed that although living in a western and modern country, Muslim families in Brazil are struggling to keep their traditions and religion at full practice, special during Ramadan,” said Muhssen Jalil, president of Islamic Brazilian Organisation.

“The surprise is that a large number of the responsible for keeping Ramadan among their families are women who were born in Brazil but have Arabic origin but sometimes such decision could bring headache to them.”

However, the Islamic Brazilian Federation puts the number at around one and a half million.

The majority of Muslims are descendants of Syrian, Palestinians and Lebanese immigrants who settled in Brazil in the nineteenth century during the World War I and in the 1970s.

Many Iraqis have arrived in the country after the 2003 US-led invasion.

Most Muslims live in the states of Parana, Goias, Riod de Janiero and Sao Paulo, but there are also significant communities in Mato Grosso do Sul and Rio Grande do Sul.

But many Brazilian Muslims encounter troubles while trying to teach their children to fast during the holy month.

“Two days ago I had to go with a friend at his son’s school to convince the director that even fating the young boy could act like any other kid at school and he was doing that since he was eight,” said Jalil.

“Some people feel worried when they see a children fasting but we know that it won’t affect their lives but instead bring more hope and benefits.”

“The first time I fasted in my life I was seven and don’t regret for one second,” he told IOL.

“I remember my father’s friends criticising him but he stood against any accusations and today I have a family, a good job and expect to follow his steps towards my children.

“Ramadan is a moment of reflection, a moment that we feel pure from the impurities present outside home and fasting doesn’t change our way of behaving or towards our friends.

“I love Ramadan and I’m happy to see that my children are sharing the same thoughts too.”

Thanks to its tolerance, Brazil is becoming a magnet for Muslim tourists from around the globe, where they enjoy holidays while keeping their religious traditions.

"We have a chance to be ourselves in Brazil," Egyptian tourist Abdel-Rahman Yehia, 51, told IslamOnline.net.

"For three consecutive times we have chosen this country for holiday and are happy with our achievements and freedom."

Yehia said Brazilians show a great interest in knowing more about Islam whenever they meet a Muslim tourist.

"They come over with hundreds of questions that make us satisfied to answer," he said.

"Once my food got cold because the waiter didn't stop asking me about my country and religion," he recalled.

Sajida Obeid, 58, was fascinated with the tolerant atmosphere in cosmopolitan Brazil.

"I came with my sons after hearing so many good information from Brazil and would chose this country to live if I had to move out from Lebanon," Obeid told IOL.

Obeid recalls when she first went to Santos coast.

"I was worried that when I go to the beach wearing clothiers, people were going to stop me or ask me to leave but they walk across like if I wasn't there," she said.

"You feel all the time like if you were one of them.

"I keep my tradition, despite not wearing a scarf but would never let someone see my body and in Brazil it makes no difference."

Brazil comes second after Britain as the most favorite tourist destination for Muslim tourists.

"We are happy to open our doors to any nationality, religion and ethnicity, this is the face of Brazil," said Roberto Almeida, media officer for the Ministry of Tourism and Information.

"The vast numbers of Arabs in this country, who have made good achievements and just sent good news to their relatives, have made it suitable for Arabic people to come and visit."