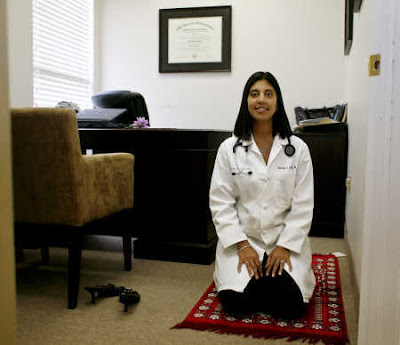 Parveen Vahora's Islamic faith and spirituality guide her life — from her practice as a gynecologist to her daily interactions with others.

"My belief as a Muslim — the core of Islam — is to help people," she said. "I have a deep spirituality within me."

Vahora's faith permeates all aspects of her life — the way she chooses to practice medicine, the community where she devotes her time and money, her daily interactions with people, and her ability to find commonality among religions.

While she acknowledges that there are fanatics who claim to be Muslims, she said Islam is a very tolerant religion, and she's proud to share it with others.

"I call myself a religious person, but I'm not an extremist. It's what you make of it," said Vahora, a Hudson resident whose parents are from India. She grew up in Pennsylvania.

Vahora, 34, whose practice is in New Port Richey, uses a minimally invasive, laparoscopic procedure for surgeries such as hysterectomies. There are no major incisions, she said, thus less pain and scarring.

"I don't believe in invasive surgery," she said. "I classify myself as a minimalist."

While this type of practice is becoming more common, fewer than 10 percent of doctors are trained to do it. In Vahora's case it stems from her belief in God.

"God gave me this gift," she said. "The basic tenet is to do no harm."

She prays with her patients when it's appropriate. And before every procedure, she says a prayer to "thank God for this ability that he gave me. That centers me and focuses me."

She usually wakes up by 6:15 to pray. Muslims are expected to pray five times during the day, though she isn't always able to.

Jamie Candalora, a registered nurse who lives in New Port Richey, is Vahora's patient and friend.

"She's taught me a lot about her faith," said Candalora, a Catholic who has visited the mosque with Vahora. "I've never really known anyone who is Muslim. She's always willing to share in a really quiet way what her faith is about.

"She's just so quiet and so serene. I admire her."

Vahora's friends say she's always working to help others, whether it's a fundraiser for Pace Center for Girls, a 5K race with Gulfside Hospice, or helping the Community Service Council in West Pasco.

"She's always the first one to raise her hand," Candalora said.

Wearing perky lavender scrubs under a white doctor's coat, she had just come from surgery Monday evening. With a big, warm smile she said she prefers to wear "cute little dresses."

In her small office, Vahora pulls out an intricately stitched burgundy, blue and white prayer rug with a compass sewn into the middle so she can face the right direction when praying — east toward Mecca. To pray, she kneels on the rug in the corner. This day, she has taken a hijab, used to cover her hair and face, home to wash.

During menstruation, Muslims aren't expected to pray and it's better they not touch some items associated with prayer.

"I can't touch it when I'm menstruating," she says of her head covering.

Prayers in Arabic hang inconspicuously on the walls, along with splashes of purple in silk flower vases and other decor. The Muslim wall hangings are from her mother, she said. There's one outside her office that she stops to look at and every day says for "health and prosperity."

She eats only halal meat, which must be slaughtered and prepared a certain way.

Raised as an observant Muslim, God and religion have influenced her choice of schools, decisions on treating patients and all other aspects of her life.

"Everything stems from prayer," she said. "I don't separate religion out from who I am."

If her patients are faced with a difficult decision or having trouble, she tells them, "I'll keep you and your family in my prayers." She has invited patients to join her at the mosque where she prays, the Islamic Center of New Port Richey on Grand Boulevard.

During the monthlong holiday of Ramadan, which begins this year on Aug. 22, it's customary to fast from sunrise to sunset, then have a meal each night.

Last year several patients came with her to the center when it was her night to host the dinner. She also invites people from the Keystone Sunrise Rotary Club, where she's an active member.

Ginny Pierce, past president of the Keystone Rotary, has known Vahora for three years. They met through Community Hospital when Pierce, who works for a printing company, printed Vahora's business cards.

"I immediately was just drawn to her," said Pierce, a Southern Baptist. "She believes that your spirituality has a lot to do with your health, and so do I.

"I think that's why she's so popular in the community. She truly cares about people, not just as a patient but a person."

Because of her faith, Vahora was hesitant when Pierce approached her about becoming a Rotarian. After Pierce assured her that the group had nothing to do with religion or politics, Vahora discussed it with her family and realized it was a way for her to do community service.

"I really enjoy giving back to the community and helping, I don't consider that out of the ordinary," Vahora said.

Vahora said she grew up with Christians, Jews and Hindus coming to her house. She likes finding and discussing the similarities among various religions.

"Islam is a very tolerant religion," she said. "All of our religions teach us to be nice to people and respect each other — if you're true to your religion.

"Religion is something loving, something we're doing for God."

She said she has noticed recently that more people are opening up about religion. She senses an increase in tolerance.

But she's quick to add that "certain bad people give religion a bad name."

Since returning from a pilgrimage to Mecca a few years ago with her husband, an anesthesiologist who is also Muslim, she said it strengthened their relationship and faith. Pilgrimage, or Hajj, is an obligation for all Muslims who have the ability to make the journey.

She has been reading more books about Islam and is more driven to share what she learns — whether it's with strangers on airplanes or patients in her office.

"I always talk to people I meet about my religion," she said. "It's interesting to see the similarities."

Email ThisBlogThis!Share to TwitterShare to FacebookShare to Pinterest
Labels: Islam and Muslims