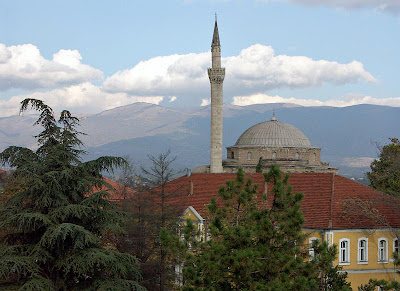 With a first-ever daily television show and radio programs about their faith, Macedonian Muslims are welcoming the fast-approaching holy fasting month of Ramadan.

“We are preparing a series of TV and radio programs for the holy fasting month,” Rufat Sherifi, the head of the Islamic Youth Forum (FRI), told IslamOnline.net on Saturday, August 15.

This year’s Ramadan will see the first-ever daily TV show about the Islamic faith.

Produced in tandem with a Muslim media production company called M7, the 40-minute program features a host of prominent Muslim scholars from Macedonia as well as Kosovo and Albania.

The Muslim leader said that local channels have been competing to broadcast the daily program during the fasting month.

“All these channels have welcomed to cooperate with the FRI and broadcast the program free of charge,” he said.

FRI is also seeking to broadcast the daily program on Albanian-speaking satellite channels.

"This will help all Albanian-speaking people in the Balkans and western countries to benefit from the program," Sherifi said.

Ramadan, to start in the Balkans on Friday, August 21, is the holiest month on the Muslim calendar.

Macedonian Muslims are also preparing a series of radio program for the holy fasting month.

RFI has translated into Albanian prominent Egyptian preacher Amr Khaled’s show “With Your Name We live", a program that tackles the names and attributes of Allah.

“It will be broadcast on nine local radio stations,” said Sherifi.

FRI has also agreed with Albanian daily Koha to publish a series of articles and opinion pieces during the fasting month.

“It will also publish Ramadan calendar in addition to covering Muslim activities in Macedonia during the holy month.”

Family affairs will also top the agenda of Macedonian Muslims during the dawn-to-dusk fasting month.

“Our activities will focus on family issues this year,” Sherifi told IOL.

“A prominent Turkish preacher will be invited to address the events on challenges facing the Muslim family,” he said.

“These clips will be broadcast on local channels,” he said.

Muslims make up nearly a third of Macedonia's two million population, according to the CIA Fact Book.

But other estimates suggest Muslims make up half of the country's population.