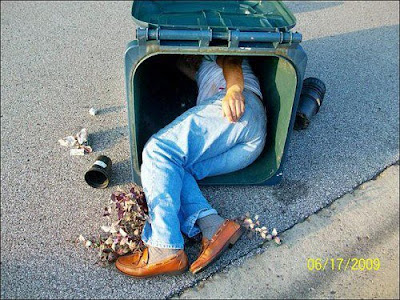 A man called police in Jeffersonville, Ind., to say that there was a man sleeping on his property -- inside his overturned trash can. It was no street bum: it was his next-door neighbor, Larry Wilder, police say. Wilder was apparently intoxicated, they say, but said no crime had been committed, and officers walked him home. Wilder is a private attorney on contract to represent the city and the local school district at $100 an hour; he has resigned both positions. "I can't tell you what happened. I wish I could," Wilder said later -- the last thing he remembered was celebrating with a client. He thinks he only had "three or four" drinks, and "I take responsibility for my conduct." He is upset that photos of him in the trash can were leaked to the media, and accuses the police of doing it. "I think the police officer who leaked the photos should only apologize to my kids," Wilder said, but "I would defend that police officer if any effort is taken to discipline him." (Jeffersonville News and Tribune)
~~~~~~~~~~~~~~~~~

"Addiction is a disease that affects your brain and your behavior. You have control over your choice to start using drugs, but once you start, their pleasurable effect makes you want to keep using them. When you become addicted to alcohol or other drugs, your brain actually changes in certain ways so that a powerful urge to use drugs controls your behavior. Someone who is addicted uses drugs without thinking of the consequences, such as problems with health, money, relationships, and performance at work or at school." (Substance Abuse: What It Is and How to Quit, last accessed 9 July, 2008)

According to these people, addiction is a disease. But note the second sentence above: "You have control over your choice to start using drugs, but once you start, their pleasurable effect makes you want to keep using them."

This means that if a particular person does not deliberately choose to use a drug or alcohol for the sake of pleasure, he or she will not become an addict. This means that the real cause of addiction is a personal choice by the addict. There is something called 'substance abuse'.

For example, if a person drank alcohol a couple of times, it does not mean that he has an addiction, but it does mean that he is abusing a substance, and that could be the starting point of an addiction.

If a person has become an addict to a substance, his body becomes dependent on that particular substance. Even smoking is physically addictive. And if an addict stops using a substance like drugs or alcohol he may experience withdrawal symptoms, like shaking, diarrhea or feeling awful.

And psychologically he may develop a strong craving or desire for that substance, to such an extent that he would be ready to commit even crimes for the sake of getting it. That is to say, a severely addicted person may feel a terrible compulsion to get the substance by any means just to satisfy his craving.

What Islam does is to cut the roots of addiction by declaring that all the addictive substances prohibited in the first place. And anyone who goes for something prohibited commits a sin, and if he persists in committing the same sin, it becomes all the more compounded.