Muslim woman banned from wearing a 'burkini' in France 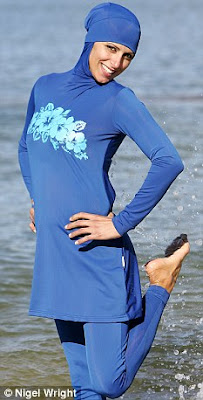 The Burkini swimsuit - designed to spare the blushes of Muslim women worldwide - was plunged into controversy yesterday.

A French mother was banned from wearing the three-piece outfit at her local swimming pool.

Carole, a 35-year- old Muslim convert, was told it was ' inappropriate' on hygiene grounds, but she insists the ban is racial discrimination.

It follows French President Nicolas Sarkozy recently attacking Muslim burkhas as a 'sign of subservience' for women and saying they should be banned.

Carole - who did not want her surname published - bought her burkini for £40 during a holiday in Dubai.

She said: 'I was told that it would allow me the pleasure of bathing without showing off my body, which is what Islam recommends'.

She approached a number of swimming pools before the manager of one in Emerainville, near Paris, said there would be no problem with the burkini.

Carole, who converted from Christianity when she was 17, insisted: 'For me, it's discrimination. I understand that the burkini can shock, especially as we're in France, but what disturbs me is that this is a political issue.

'I'm going to fight this problem through anti-racism groups, and if no solution is forthcoming I'll consider leaving the country.' She has made a formal complaint to police at nearby Meaux.

Yannick Decompois, swimming pools director for the Marne-la-Vallie area, said: 'This isn't anything to do with discrimination, but simply a hygiene problem. We also ban people wearing shorts in pools - it's the same thing.'

French pools bar any clothes that can also be worn outside, where they can pick up dirt and contamination.

In June Mr Sarkozy risked the wrath of Muslims by backing demands for the full-body burkha to be banned, calling it a sign of the 'debasement' of women.

'In our country, we cannot accept that women be prisoners behind a screen, cut off from all social life, deprived of all identity,' he said.

The president was supporting a call by dozens of French politicians for the ban.

France has Western Europe's largest Muslim population, an estimated 5million. But in 2004 it passed a law banning the Islamic headscarf and other conspicuous religious symbols from state schools, sparking fierce debate at home and abroad.