Swiss move to ban minarets as 'symbols of Islamic power' 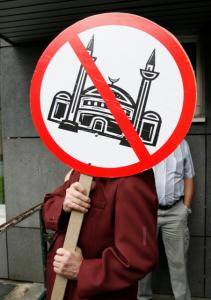 The normally sleepy Swiss country town of Langenthal has become the focus of a virulent right-wing campaign to ban minarets from all mosques in the Alpine republic on the grounds that they symbolise ideological opposition to the country's constitution.

Switzerland's "stop minaret" movement is backed by the influential ultra-conservative Swiss People's Party, (SVP) which was re-elected in 2007 with its largest ever share of the vote after mounting an anti-foreigner campaign that was denounced by the United Nations as racist.

Ulrich Schüler, an SVP parliamentarian and leading member of the anti-minaret movement, says the edifices are political rather than religious. "They are symbols of a desire for power, of an Islam which wants to establish a legal and social order fundamentally contrary to the liberties guaranteed in our constitution," he said.

Switzerland is home to a population of about 400,000 Muslims, the majority of whom are Turks, Bosnians and Albanians. The "stop minaret" campaign was launched two years ago, prompting a national debate on the subject. A petition in support of its aims has since been signed by more than 100,000 citizens. Under Swiss law the issue now has to be decided by a national referendum which will be conducted in late November.

However, before then, the "stop minaret" campaign is hoping to create a legal precedent by thwarting construction of a minaret in Langenthal, a provincial town halfway between Bern and Basel that is home to 14,000 people and 11 churches.

Thomas Rufener, the town's mayor, said about eight per cent of Langenthal's residents were Muslims. "All the main parties have given their approval for the mosque," he said. The regional canton of Bern has given approval in addition for the construction of a domed mosque. That will stand alongside the planned minaret which will be little more than 30 feet high.

An anti-minaret campaign has now lodged a formal complaint with the canton, claiming that the planned mosque amounts to an "ideological intrusion". Daniel Zigg, a campaign spokesman, said the building would attract more than 100 Muslim believers a day during the Ramadan fast because it was the only one of its kind in the canton.

The anti-minaret campaigners are hoping to force Bern to rescind its approval for the minaret and score an important victory in the run-up to the November referendum. "There may be different laws governing this kind of thing in certain part of Paris or Berlin, but we don't want them in Switzerland," Mr Schüler said.

Two years ago his party fought a general election with famously xenophobic campaign posters depicting a flock of white sheep kicking a black sheep out of Switzerland.

Switzerland has permitted the construction of mosques with minarets in major cities such as Geneva, Zurich and Winterthur where they have been accepted with little noticeable objection. However the inauguration of a mosque with a minaret in the small town of Wangen in June brought protests from the "stop minaret" movement and accusations that the town's Muslim community had links with the right-wing Turkish extremist group, the Grey Wolves.

Switzerland's Muslim community has been largely reluctant to discuss the anti-minaret campaign. Ahmed Sadaqat, Imam at Zurich's Balgrist mosque, the first to be built in Switzerland in 1963, recalled last week how the building provoked vociferous protests at the time. But he added: "Since then there have be no problems at all." He accuses the anti-minaret campaigners of failing to make any distinction between Islam, the burqa and terrorism. "They should accept that Muslims are a fact in this society and that they live here. They must accept this reality," he said.