Netherlands: Hide yourself to be accepted 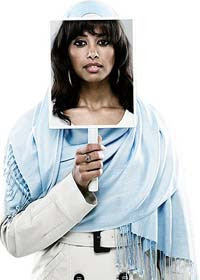 "Notice: No Moroccans!" That was the common request from four store managers of Servex (a company that manages various small supermarkets on the Dutch railway stations) when asked to submit the profiles of the employees sought.

It was a very shocking notice that the Bureau of Discrimination Affairs in the Hague immediately filed a lawsuit against Servex, bringing the company to court.

For the attainment of these objectives, the law requires that every city with an independent police agency should also have a bureau of discrimination affairs, like the one in the Hague. Forty-three of these bureaus are currently active and spread throughout the Netherlands.

As a way of promoting the new anti-discrimination legislation, a campaign was launched to make people more acquainted with the bureaus in different areas of the Netherlands. TV commercials, websites, web banners, advertisements in newspapers, magazines, and posters in bus stops are among the methods of raising awareness.

Hide To Be Accepted

The Amsterdam-based advertising agency Imagine has based the campaign's main idea on some people carrying faces of others covering theirs to hide their true identities. For instance, a Muslim woman who is shown wearing a headscarf is seen to be holding the picture of an unveiled woman.

The concept is applied but with different categories: a black male waiting for a taxi while holding a picture of a Caucasian male; two elderly people holding pictures of younger people; etc.. A voice-over asks the viewers, "Do you need to hide your true self to be accepted? If you feel discriminated against, call 0900-2 354-354 or visit discriminatie.nl. "

Worth mentioning here is that Art.1, with more than 10 years of experience in the field, has had an advisory role in both the content of the new law and in the propaganda of the campaign.

Mariëtte de Heide, managing director of Art.1, explained, "Based on our previous experience and many surveys done by Art.1, we were able to prevent the two main mistakes which can be made with a campaign like this," she added.

The first mistake is to focus too much on discrimination being an illegal act, since research shows this never decreases the negative thoughts that some people have towards other groups. It actually makes it stronger. The second mistake is to victimize people who are being discriminated [against]. This leads to a feeling of shame and prevents people from filing complaints when faced by such a situation — the opposite of what we are trying to accomplish.

Making a real change using a 27-second commercial or a simple poster is quite a challenge. Fleur Boose, communications advisor at the Dutch Ministry of the Interior and Kingdom Relations, emphasizes, "We try to show that everybody can be in a position in which they feel they have to be different from the outside rather than from inside."

By using a large variety of images, Bosse hopes to appeal to the actual experience of as many people as possible and stimulate them to report discrimination at any of the specialized bureaus.

However, for this message to be communicated, various stereotypes were used to represent groups of people.

One scene in the commercial is described by Postbus51, the governmental general information service, as a "female police officer who is talking to a man. She is holding a picture of a male officer in front of her face." However, when watching the commercial, one actually sees a dark-skinned man wearing a typical Moroccan djellaba and standing in front of a mosque while emotionally yelling at the female officer (holding the male officer's picture).

The stereotype shown is the Muslim or Moroccan male not accepting female authority — discrimination based on gender. This is seen as a surprising image in a campaign directly focusing on discrimination.

When asked why this particular image is used, Boose explained that it is simply impossible to guarantee that the visual material will be equally appreciated by every viewer: "We thoroughly tested the campaign using test panels. We found the concept to be sufficiently appreciated by this panel for us to move forward and launch the campaign in this form."

De Heide was surprised when that specific image was pointed out to her as being a negative stereotype: "I never looked at it this way. We strongly appreciate feedback on this or other views regarding this campaign. This feedback will be used in the evaluation of the campaign and may influence the way the campaign will be run next time."

A few complaints were filed against the campaign from a group that was not expected to have such attitude. "Some complaints were from Caucasian middle-class middle-aged males stating they also face discrimination, but this is hardly ever recognized in any campaign," Mariëtte added.

The campaign was launched on June 23, 2009 and continued until August 2, 2009. The main objective was to raise the percentage of complaints filed regarding discrimination. Research done by Art.1 has shown that approximately 80 percent of all experiences of discrimination do not end with an official complaint, which the campaign aims to change. Serious results are required and expected from that campaign.

The primary results have already been subjected to analysis. "The positive impact of this campaign is huge. Throughout the entire country, a significant increase in the amount of filed complaints is reported.

In the major cities, the amount of complaints has even tripled," De Heide proudly stated, "More complaints mean more insight, so we can improve our activities to prevent and react to discrimination of any form in the Netherlands. For the future, we still hope that with more data available, we can get the law to also make it mandatory for the local government to work on prevention."

Muslims and Discrimination in Netherlands

Even though the campaign is not focused on a specific ethnic, religious, or peer group, it strongly appeals to the Dutch Muslim community. The image of the veiled woman carrying a picture of an unveiled woman in front of her face is a very powerful image. If Muslims also increase the amount of complaints filed regarding discrimination, it can benefit them in various ways.

A recent report issued by the Radboud University for the National Centre for Diversity Expertise of the Dutch police force shows that religiously motivated discrimination hits Muslims more than other religious groups. The focus here is on discrimination, such as threats, insults, violent abuse, and damage to objects.