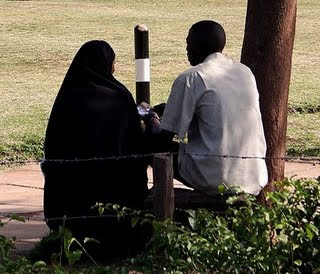 A Malaysian man who forced his wife to have sex with him has been sentenced to the maximum five years in jail, in the country's first successful prosecution under a new law against marital rape.

Prosecutor Law Chin How said the man was sentenced in a sessions court in eastern Pahang state.

He said the case was the first in the country under a 2007 law that makes it illegal for a husband to cause "fear of death or hurt to his wife ... to have sexual intercourse."

"We asked for a heavy sentence. First of all to protect women ... and to give others encouragement to stand up," he said today.

The amendment to the penal code that made marital rape a crime was considered a small step toward women's rights in conservative Muslim-dominated Malaysia. But some activists say it doesn't go far enough because the law doesn't stipulate a minimum sentence, which means a man could go to jail for as little as a day even if convicted.

The 35-year-old man was, however, sentenced to the maximum five years allowed. The punishment for rape outside marriage is up to 30 years.

Law said the man changed his plea from innocent to guilty for both charges Tuesday, a day after the trial started.

So what is Islam's stance on Marital Sex?

Islam lays much emphasis on the concept of mutual love between spouses; why the Glorious Qur’an made it clear that “It is He Who created you from a single person, and made his mate of like nature, in order that he might dwell with her (in love).

“The relations between the spouses should be based on tranquility, love and mercy. Allah says, "And among His Signs is this, that He created for you mates from among yourselves, that you may dwell in tranquility with them, and He has put love and mercy between your (hearts): verily in that are Signs for those who reflect." (al-Rum 30:21)

Tranquility (sukun), love (mawaddah) and mercy (rahmah): these are very important concepts in Islam. These three summarize the ideals of Islamic marriage. It is the duty of the husband and wife to see that they are a source of comfort and tranquility for each other. They should do everything physically, emotionally and spiritually to make each other feel happy and comfortable. They must care for each other. They should not inflict any harm or injury, neither physically nor verbally, to each other. In order to increase the tranquility and comfort in their relations and in their home, they should love each other and should have mercy and kindness for each other.
Loving and merciful relationship is an important ingredient of a good marriage and good family life.

In Islamic marriage, neither the husband is allowed to demand his wife what is forbidden by Allah and what is harsh and unseemly, nor the wife is allowed to demand her husband to do anything that Allah has forbidden and what would put undue burden upon her husband. Sex is a natural urge and desire. Islam allows sexual intercourse only among the married couples. Fornication and adultery are forbidden in Islam. Since according to Islam there is no other permissible way for this desire to be fulfilled except between the spouses, they must be considerate to each other.

The Shari`ah has given us two important principles in this matter. (1) The first principle is that the husband should not deny himself to his wife and the wife also should not deny herself to her husband. They should do their best to satisfy their marriage partner. Even during the menses or post childbirth bleeding, when intercourse is forbidden, husband and wife can be together and can enjoy affection and intimacy in other ways.

(2) The second principle is that in their conjugal relations the couples should be kind and considerate. There are some Ahadith that report that the Prophet, peace and blessings be upon him, disapproved when he heard that some husbands approached coitus abruptly and make a crude departure at the end of the act. It is reported, for example, that the Prophet, peace and blessings be upon him, said, "It is a rude manner of a man to proceed to have intercourse with his wife without first playing with her." Or "It is a vice in a man to assault his unprepared wife, seeking to satisfy his own lust and leaving her before she could achieve her own fulfillment…" Imam al-Ghazali in his Ihya' (vol. 2: 49-50) has mentioned these Ahadith. Most of the scholars of Hadith consider these Ahadith weak (da`if) and we cannot say with surety that they are the statements of the Prophet -peace be upon him, they do, however, contain some wisdom and etiquette that are natural and Islamic.”

As for the husband’s right to sexual access and its conditions, Sheikh Ibn al-`Uthaymin, the well-known Saudi scholar, adds:

“It is obligatory upon the wife to respond to her husband if he calls her to his bed. However, if she is psychologically ill and is not able to actively respond to his call or if she has a physical illness, then in such cases it is not allowed for the husband to call upon her. This is because the Prophet (peace and blessings be upon him) said, "There is to be no harm done or reciprocation of harm." He should either refrain or enjoy her company in such a way that does not harm her.”

So, this indicates that there shouldn’t be anything called marital rape in the Islamic marriage, i.e. marriage governed by the rules and teachings of Allah Almighty and the beautiful example set by the noble Prophet, Muhammad, peace and blessings be upon him. Sexual relationship between husbands and wives should be based on mutual love and respect. This point is stressed by the following fatwa, issued by the eminent Muslim scholar, Sheikh Muhammad Al-Hanooti, member of the North American Fiqh Council:

“Intimacy should be a matter of etiquette and courtesy, not a matter of abstract desire. The Prophet, peace and blessings of Allah be upon him, as `Aisha, may Allah be pleased with her narrates, used to have good foreplay and fondling and the like so that a spouse should be in the mood to have intimacy. What the Hadith means is that a wife should respond positively. Man should never jump to the extent of forcing his wife, but she should show no arrogance or hatred or denial when it comes to her appreciation and respect of her husband. Her denial to intimacy usually should give a hint to the husband that she is not physically or emotionally ready for that.

The husband should be of good reason and understand her situation. The husband should show almost the same response, and the same etiquette, if the wife hints to desiring intimacy with him. However, he is less offensive than his wife if he doesn't show a good response. In general, the Qur’an says, "They (wives) have as many rights as they are committed to duties." But a man should not be away from intimacy for any longer than four months, if the woman is in need of it.”