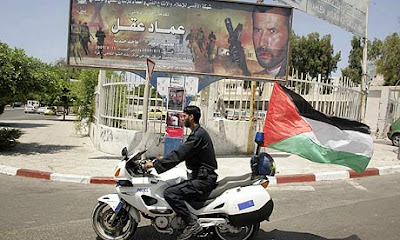 The film's hero is a young militant, blamed by Israel for the deaths of 13 soldiers and settlers, who was killed at the age of 22 in a firefight in 1993. Many of the actors are Hamas members and, since the movie was finished, four of them have been killed in an Israeli attack. This is Imad Aqel, the first feature film funded by Hamas.

The film began showing at a cultural centre in Gaza at the weekend. Shot on the grounds of Gnai Tal, one of the Jewish settlements evacuated in 2005 when Israel withdrew from the territory, it is a two-hour, action-packed thriller celebrating the life and martyrdom of Aqel, a commander of the Hamas military wing who topped Israel's most-wanted list.

According to newspaper reports, the line that elicits the biggest cheer from the Gazan audience is when one of the characters declares: "To kill Israeli soldiers is to worship God."The film's director, Majed Jendeya, says he hopes to screen Imad Aqel at the Cannes film festival.

The movie was written by senior Hamas member Mahmoud al-Zahar and produced by the interior minister, Fathi Hamad. It cost $120,000 (£70,600) and is the first film to be produced by the Islamist organisation.

"It's Hamaswood instead of Hollywood," said Hamad after the film's premiere last month at Gaza City's Islamic University. "We are trying to make quality art that is Islamic and about the resistance, without provocative (sexual) scenes."

The biopic is just the latest effort in Hamas's media campaign to instil a "culture of resistance" in the territory. It also owns a satellite television station, a radio network and websites, as well as sponsoring art exhibitions, plays and poetry which tell of the harsh conditions in Gaza.