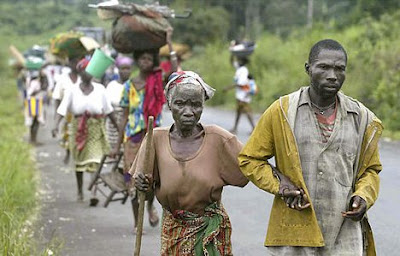 Let me make it clear that this story is not connected with Islam or Muslims but a discussion I had is.

The hundreds of Liberian families who sought refuge in Arizona fled a West African civil war that piled the unthinkable upon the more routine horrors of conflict, many at the hands of children.

In Phoenix the families thought they had put all that behind them but in recent days they, and much of the rest of Arizona's capital, have grappled with what appears to be a terrible crime apparently made worse by an almost incomprehensible response.

It was bad enough that four boys, one only nine years old, allegedly lured an eight-year-old girl in to a shed with a promise of chewing gum and took turns raping and assaulting her. But what followed has left Phoenix residents and authorities perplexed and angry.

When the police arrived, the girl's mother told them to take her daughter away and not bring her back because she brought shame on the family by saying she was raped.

Four boys who were found running from the scene have been charged with kidnapping and sexual assault. Steven Tuopeh, 14, is being prosecuted as an adult. The others, aged from nine to 13, will be tried in juvenile court.

Now the mother is calling for her daughter's alleged attackers to be released saying that it is an internal matter within the close-knit refugee community of about 1,200 Liberians who fled their country's civil wars, notoriously brutal even by African standards, but cannot escape their legacy.

The conflicts were marked by indiscriminate killing, mutilation and rape - and the recruitment of child soldiers who were responsible for all three often while high on drugs or alcohol. Children were also frequently the victims of rape. Many others witnessed killings, sometimes of parents. Before they made it to America some were struggling by in refugee camps.

You can read the rest of the story here.

In Islam we are encouraged to be good. Allah will only hold us responsible for our actions. If we even think good, Allah rewards us no matter if we diddnt do the good action. Just thinking good is enough. If we think bad, we will not be punished just for thinking bad unless we do the bad action. If we think bad and then do Astaghfar, we get reward for saying sorry for a bad thought.

People (Muslims or otherwise) from different parts of the world go and settle in new places. Sometimes they have cultral baggages that are not required. They take it with them. These baggages cause problem for them, for the people living there, for others like them who have come in past or will come in future. In the end we are responsible for our actions in front of Allah and also the law of the land. We should always keep this in mind.
Posted by Zafar Khan at 19:51