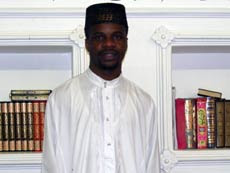 Five times a day, Mulongo climbs the minaret of the Cape Town mosque to urge Muslims to come to their prayers.

But for the rest of the, he complains, he is expected to undertake several grueling tasks.

"The mosque trustees say it's my job to clean the toilets of the mosques, wash towels [and] clean the wudu (ablution) place," he told IlsamOnline.net.

Mulongo complains that besides the maltreatment, he is grossly underpaid that he can barely make a living.

"All I ask for is an increase."

He is one of many muezzins in South Africa who complain of being ill-treated by their mosques trustees.

Mustafa Kandulu, a Malawian-born who works at a mosque in Johannesburg, says he was given a very small and dusty room to live in.

"I sleep on a rusty steel bed while my room is too small and dusty," he told IOL.

Another disgruntled Muezzin in Cape Town, who preferred to remain anonymous, says his mosque’s trustees threaten to sack him whenever he asks for a raise.

"My children at times get sick but I can't afford to take them to hospital."

Farouk Kamalie, chairperson of the Palm Tree Mosque, the second oldest in the entire Southern Africa region, admits some mosques mistreat their muezzins.

He insists that it is un-Islamic to treat people as "no bodies", especially muezzins.

Muslims make up to 1.5 percent of South Africa's 44-million population.

There are some 455 mosques nationwide and Cape Town reportedly has the oldest ten mosques.

Faisal Mohammed, a muezzin who works for the Auwal Mosque in Cape Town, contends that mistreatment is not the norm in mosques.

"Alhamdulillah, I can not complain," he told IOL.

The smartly dressed Tanzanian-born says that since he came to the mosque, he found good treatment and a fair salary.

"I haven’t experienced what my fellow muezzins say they are going through," he insisted.

"I feel at home here in the Masjid Auwal. I'm treated very well."

Sheikh Jumah, who has been a muezzin for the past 16 years, had a mixed experience.

"Sometime back I was mistreated by the trustees at a Durban mosque where I served," he recalls.

Now, Jumah serves in a mosque in Gatesville, a suburb in Cape Town.

"I have a house to live in with my family and I do my duties very well," notes the middle-aged Tanzanian national.