Casablanca Calling: An exploration of women and Islam in Morocco through the story of three female Morchidat or spiritual guides.

Full article:
Posted by Zafar Khan at 09:00 No comments:

In Israel, only Jewish blood shocks anyone 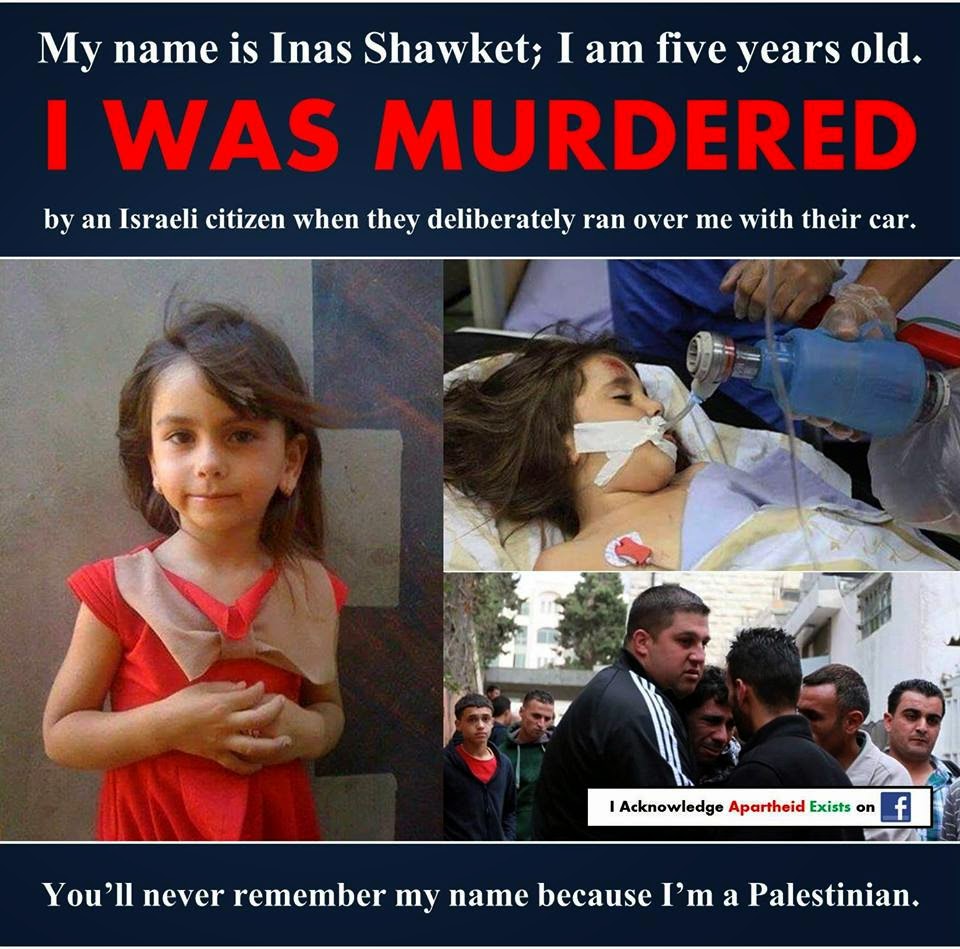 Terror is always Palestinian, even when hundreds of Palestinian civilians are killed. The name and face of Daniel Tragerman, the Israeli boy killed by mortar fire during Operation Protective Edge, were known throughout the world; even U.S. President Barack Obama knew his name. Can anyone name one child from Gaza among the hundreds killed?


A few hours after the attack in Jerusalem, journalist Emily Amrousi said at a conference in Eilat that the life of a single Jewish child was more important to her than the lives of thousands of Palestinian children. The audience’s response was clearly favorable; I think there was even some applause.
Afterward Amrousi tried to explain that she was referring to the way the Israeli media should cover events, which is only slightly less serious. This was during a discussion on the ridiculous question: “Is the Israeli media leftist?” Almost no one protested Amrousi’s remarks and the session continued as if nothing had happened. Amrousi’s words reflect Israel’s mood in 2014: Only Jewish blood elicits shock.
Source
Posted by Zafar Khan at 09:00 No comments:

Who Are The Rohingya Of Myanmar?

I saw a young girl - probably around 11 or 12 - at Jumu'ah who exemplified to me the current state of this Ummah's growing generation: very bright, clearly frustrated, and quick to point out the obvious while everyone else remains awkwardly silent.
I can see her future going one of two ways:
Either the masjid and the community recognizes her potential and grabs onto it, mentoring her and providing her with resources and outlets for her energy and intelligence, and molding her for a brilliant adulthood inshaAllah - or it will squash all that is fierce and beautiful in her and tell her that Muslim girls and women are not meant to speak up and challenge the status quo even when something is very obviously wrong with it; it will tell her that the Muslim community is unwelcoming and has no place for her; it will tell her that this Ummah prefers to rot from the inside out rather than accept the sting of (legitimate) criticism and grow and improve for others just like her.
Which path will we push her into traversing?

From the excellent Salafi Feminist's FB page. Follow her on twitter:  @AnonyMousey
Posted by Zafar Khan at 09:00 No comments:

All About Love with Yaser Birjas - Allah is the Most Affectionate

Mads Gilbert and Gaza (on Hamas and 'terrorists', Israel and apartheid)

Separated from Other Students

Sirine Ben Yahiaten, 17, has been wearing the veil since she was 14. From December 2011 through May 2012, she says she was harassed by the head of her school as well as other staff members who wanted her to stop wearing wide hair bands and long skirts. Eventually Ben Yahiaten left to complete her education at another school.

It was the month of December and it was cold. I had a long skirt and sweatpants underneath. I was wearing a wide hair band on my head. One of the teachers called me upon my hair band and asked me to remove it. I didn't understand why. He told me that it was an ostentatious sign. There was nothing of ostentatious in my opinion. He asked me three times to remove it. I kept refusing. He then took to me the office of the principal. While waiting for the principal, her secretary told me that I should not be wearing a pair of sweatpants under my skirt because there was a law that bans such dress code. The truth is that there is no law. I tried to explain that the weather warrants my choice of dressing... The principal didn't show up so I was sent back. But on my way back to class, I was asked to return to the principal's office. She told me that my skirt was too long and students walking behind me could fall because of its length, so she said that I was posing a threat to the security of the students. As for the headband, she said it prevents me from hearing well during the class. After that episode, I was sent to study period class everyday until I would agree to take off my hair band and long skirt. Every time I entered the school, someone was waiting for me to accompany me to the study period class since I was no longer allowed to have any contact with other students. I was not allowed to go out during class breaks. I was given exercises to do but I was never given makeup material for the courses that I had been missing.


Full article
Posted by Zafar Khan at 09:00 No comments:

Kissed by an angel :)

"When a worshipper of Allah uses the siwaak (to clean his teeth), and then stands in prayer, an angel comes and stands behind him, listening to the recitation of Qur’an. The angel continues to listen and draw nearer until he places his mouth over the worshipper’s, so that he does not recite one aayah but that it enters into the angel’s mouth. Therefore, purify your mouth for the recitation of Qur’an."(Al-Bayhaqi, al-Diyaa', and others; authenticated by al-Albani)
Posted by Zafar Khan at 09:00 No comments:

Listen to this if you are depressed, hopeless || Shaykh Hamza Yusuf I remember everything. It's not something I can forget - it'll always be a part of my life. It happened in 2002. I remember every single thing, even the time it happened.
I was sitting at my parent's house, and they chose me to go and apologise for what my brother had done. I lament that they chose me, but I didn't want this to happen to any of my sisters either.
I tried to commit suicide twice after the incident because I felt like I wasn't getting any justice. What happened to me is another form of honour killing.
Honour is a toxic word. Honour is only for men here, it's not for women, who are always to blame in any given situation. The owner of a woman's honour is a father, brother, father-in-law.
A girl doesn't even have her own home: first it's her father's home, then her husband's home and then ultimately her son's home.
What happened to me is part and parcel of our system. It says that there is a difference between a son and daughter: one is better than the other.
It starts from the mother. When something is cooked, food is first given to the son and father, and if there's any food left over they'll give it to the daughter.
Men and women both have rights, God gave both rights, but it's all about lack of awareness, false traditions created by society, no law. And if there are laws, they are not implemented. Girls are killed for choosing their own partners for marriage.
And they never get justice because the killer is the father and the prosecutor is the mother - this is the system and it's a vicious cycle. Why doesn't a woman ever get justice - is a woman not a human being?
After 12 years, I am still going through appeals to the courts to get justice. The court says you need four witnesses - well I have the whole village as witnesses - but it boils down to the mindset of men in this patriarchal society.
The biggest problem is feudalism and the fact that people don't get justice. When there is no hope of getting justice, then people go to village elders because the police aren't listening to them.
And the elders will make the same decisions as the decision that was made for me.
These traditions need to end: the world is moving forward, and we seem to be standing in the same place.
Things have not improved; the only difference is that women have started asking for their rights. The media has helped a lot.
A woman never used to raise her voice or leave her house, but now a woman goes out, goes to courts, goes to meet lawyers. She is seen everywhere but there is still no justice.
Since my incident in 2002 there have been no similar events in my village. There has been a shift. The feudal authorities used to make decisions, but now there is no council the way there used to be.
Now the policemen make that decision. Even child marriages have been controlled. When I used to leave the village and come back I would find out that some girls from my school as young as nine had been forced to get married.
But now we have even stopped some weddings from happening.
Source
Posted by Zafar Khan at 09:00 No comments:

Chatar, 40, who spoke with Women's eNews in a phone interview in September, lives in the small village of Meru, in the Picardie region of France, with her three children and husband. But her fear isn't that of a small-town person in a big metropolis. It's due to her custom of covering her hair with a hijab, part of her way of practicing her Muslim faith.
In her town, Chatar feels that her neighbors both know and accept her. But the stories of Muslim women in big cities getting singled out for hate crimes scare her.
Workers at the Paris Opera recently drew international headlines by ejecting a woman wearing a full face veil, or niqab, which Paris outlawed in 2011. But Chatar's fears are not about the niqab, which she doesn't wear. All she wears is a head covering.
France began frowning on women in hijab in 2004 when the Parliament passed a ban on the display of religious signs in public schools, which meant schoolgirls could not wear the hijab. In 2012, a similar government rule extended to thousands of older women such as Chatar, forbidding them from escorting their children on school outings.
Both bans apply to school settings but for many Muslim women in France today the rulings reach much further, creating a pervasive sense of social prohibition about wearing the hijab that they break at their own risk.
Out of 1,417 Muslims interviewed last year, 2 percent – 30 individuals --reported a physical aggression, found a June 2014 study conducted by the Paris-based Collective Against Islamophobia in France. Women were almost all--97 percent--of those 30 victims.
Elsa Ray, spokesperson for the Collective Against Islamophobia, said street aggressions have been more violent in recent years. In the past veiled women were mainly targets of verbal violence, but the aggression has become more physical.
"The majority of aggressors are men and we have noticed that some women physically attacked were subjected to sexual touching while they had their clothes ripped off. These are signs of male domination," Ray said in an interview at the collective's office.
Last year, a 16-year-old Muslim woman recounted being attacked by two men in a Paris suburb in a piecepublished by the Huffington Post. "Then, he grabbed my arms trying to push me to the ground and he started to press his body against mine while he was holding my head. At that moment, the first guy started to touch my breasts. Then, he took a sharp object and started to scar my face with short and quick movements while the second guy was pressing his body against mine and he was blocking my head," the victim, named Aissetou, wrote.
Full article
Posted by Zafar Khan at 10:21 No comments: