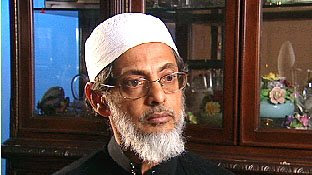 Police say an attack on a Muslim man on a Vancouver city bus appears to have been a hate crime.

Qasimali Baig, 59, said he was punched by a man shouting racial slurs after Baig boarded a bus in East Vancouver on Wednesday night.

Baig said he was on his way home after attending prayers at a mosque.

"This guy flew from his back of the bus seat and came and punched me," Baig said. The man yelled at him before the attack.

"Bin Laden is coming. All these Muslims are bad people," Baig quoted the man as saying just before the assault.

"Our Hate Crime Unit has reviewed the file and believes this was an unprovoked attack motivated by bias, prejudice or hate," said Vancouver Police spokesperson Const. Jana McGuinness

The man hit Baig just above his left eye, but the victim says he was not seriously hurt.

The bus driver stopped and called for police, who arrived within minutes. But the suspect — described as a white man in his 40s — had already fled.

Baig said none of his fellow bus passengers came to his aid. "They all got scared and started running from the bus," he said.

Baig said he has lived in Vancouver for 22 years after deciding to make the city his home because of its cultural diversity. He said this was his first personal experience with racism.