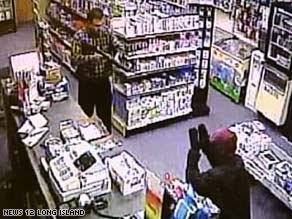 A potential victim became a compassionate counselor during a recent robbery attempt, changing the would-be criminal's mind -- and apparently his religion.

Storekeeper Mohammad Sohail was closing up his Long Island convenience store just after midnight on May 21 when -- as shown on the store's surveillance video -- a man came in wielding a baseball bat and demanding money.

"He said, 'Hurry up and give me the money, give me the money!' and I said, 'Hold on'," Sohail recalled in a phone interview with CNN on Tuesday, after the store video and his story was carried on local TV.

Sohail said he reached under the counter, grabbed his gun and told the robber to drop the bat and get down on his knees.

Amidst the man's apologies and pleas, Sohail said he felt a surge of compassion.

He made the man promise never to rob anyone again and when he agreed, Sohail gave him $40 and a loaf of bread.

"When he gets $40, he's very impressed, he says, 'I want to be a Muslim just like you,' " Sohail said, adding he had the would-be criminal recite an Islamic oath.

"I said 'Congratulations. You are now a Muslim and your name is Nawaz Sharif Zardari.'"

When asked why he chose the hybrid of two Pakistani presidents' names, the Pakistani immigrant laughed and said he had been watching a South Asian news channel moments before the confrontation.

Sohail said the man fled the store when he turned away to get the man some free milk.
Posted by Zafar Khan at 13:45