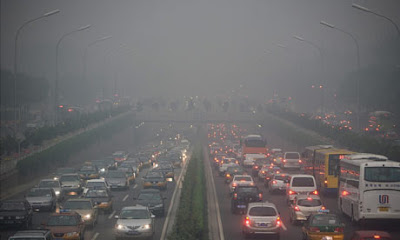 The need for a new air pollution index in Beijing was gloomily apparent today as visibility plunged, yet official statistics indicated the Chinese capital was just short of enjoying a "blue sky" day.

For the second time in a week, many drivers were forced to use headlamps around noon to penetrate the gathering darkness.

Two days ago, the skies were black because of an unusually fierce thunderstorm.

Today, they were a filthy grey – due, it seems, to a build-up of hazardous aerosols.

The Islamic attitude towards the environment that surrounds humanity is not merely restricted to the presence of Allah everywhere but also to the following dimensions:

By submitting to Allah, Islam establishes the bedrock of the relationship between finite, mortal human beings and the infinite Divine, the secular and the sacred. This relationship cannot be understood without first realising the meaning of the “submission” that the “created” should concede in his relationship with the Creator.

Humans have to accept that they are created beings who act as the “agents” of Allah on earth. These agents are creative in their own way but they are not Allah. Humans, however, will become closer to the sacred by operating according to Allah's instructions. The Prophet (peace and blessings be upon him) in a Hadith Qudsi (Divine Hadith), quotes Allah as saying: "When a worshipper moves closer to me by good virtues and voluntary acts of worship (nawafil), I will be his hearing by which he can hear, I will be his eyes by which he can see, I will be his hand by which he can act, and his feet by which he can walk. If he asks Me [to give him] I will give him what he wants, and if he asks for protection I will protect him." (Al-`Asqalani, 1959: 11, 341)

Islam, as a way of life, expects human beings to conserve the environment for several reasons which may be summarized as follows:

1- The environment, is Allah's creation. The creation of this earth and all its natural resources is a sign of His wisdom, mercy, power and His other attributes and therefore serves to develop human awareness and understanding of this creator. (Ar-Ra`d, 13: 2-4; 21:79)

2- Muslims should seek to protect and preserve the environment because by so doing they protect Allah's creatures which pray to Him and praise Him. Humankind might not be able to understand how these creatures praise Allah but this does not mean that they do not do so, Allah says: (The seven heavens and the earth, and all beings therein, declare His glory: There is not a thing but celebrates His praise, and yet ye understand not how they declare His Glory!) (Al-Israa’ 17: 44)

4- Also among the reasons why Islam seeks to protect and preserve the environment is that Islam, as a way of life, is established on the concept of good (khayr). Therefore it is expected that Islam will protect the environment once it is understood that such protection is good by itself. The Qur'an states: (He whoso do good an atom's weight will see it. And whoso do ill an atom's weight will see it.) (Az-Zalzalah 99: 7-8)

In Islam, humans are expected to protect the environment since no other creature is able to perform this task. Humans are the only being that Allah has "entrusted" with the responsibility of looking after the earth. This trusteeship is seen by Islam to be so onerous and burdensome that no other creature would 'accept' it. Allah says: (Lo! We offered the trust unto the heavens and the earth and the hills, but they shrank from bearing it and were afraid of it and man assumed it Lo! he is a tyrant and fool.) (Al-Ahzab 33: 72)

In Islam the relationship between humankind and the environment is part of social existence, an existence based on the fact that everything on earth worships the same God. This worship is not merely ritual practice, since rituals are simply the symbolic human manifestation of submission to Allah. The actual devotions are actions, which can be practiced by all the creatures of earth sharing the planet with the human race. Moreover humans are responsible for the welfare and sustenance of the other citizens of this global environment. The Qur’an contains many verses that can be referred to for guidance in this respect. The following verse 21 of the second surah of the Qur'an, is one example:

(O people! Worship your Lord, Who hath created you and those before you, so that you may ward off (evil). Who hath appointed the earth a resting-place for you, and the sky a canopy; and causeth water to pour down from the sky, thereby producing fruits as food for you. And do not set up rivals to Allah when ye know (better).) (Al-Baqarah 2: 21-22)

The word in this verse which is translated as "may ward off evil" is in Arabic tattaqun. It enjoins piety and awareness which is accompanied by an appreciation of the surrounding environment. In this verse, the Qur’an speaks directly to all groups of people, whether believers, or not. It attempts to mobilize people to the importance of "worshipping Allah" as a symbol and a way of life that enjoins justice and equity in handling the system created by Him.

This system has been placed under human responsibility, to be cared for and not misused as can be concluded by returning to verse 22 ofsurat al-Baqarah. The word lakum (for you) in the phrase "created for you" contains the message that the earth is not for one generation but for every generation, past, present and future and that would include humans as well as other creatures on this earth. Accordingly, rivers, minerals are the property of all. This should be distributed fairly and justly especially when it happens to be owned collectively like the Rivers Tigris and Euphrates.