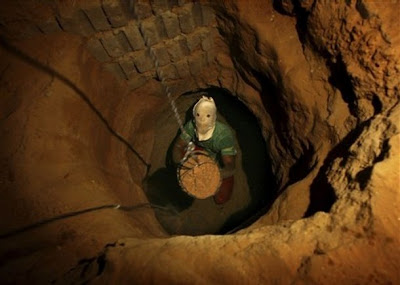 For years, a network of underground smugglers' routes from Egypt to the Gaza Strip has supplied a besieged population with everything from cement to cattle. But now a series of major scams has destroyed the dreams of desperate investors who saw the tunnels as a path out of poverty

Jawad Tawfiq, a 52-year-old Gazan actor and director, was dubious at first, but his nephew insisted. If they could scrape together enough money, the nephew said, large profits could be made from investing in the tunnels that snake beneath the Egyptian border.

"They were liars," Tawfiq said bitterly last week. "They took my money to put in their own pockets. And we are being offered a fraction of what we gave them."

At first the tunnels emerged as smuggling routes; then they became the vital lifeline for a Gaza under economic siege by Israel. But many people who invested in the tunnels now see them quite differently - as a source of ruination.

The tunnel schemes were advertised as opportunities for doubling and trebling money by unscrupulous figures linked to powerful businessmen in Gaza and, allegedly, to senior officials in Hamas, but have instead led to huge losses for ordinary residents of the Strip.

According to Hamas's economics minister, Ziad al-Zaza, whose office is investigating the issue, some $100m has been taken fraudulently from would-be entrepreneurs. Others suggest the figure could be closer to $500m.

There have been many brutal phases in Gazan history, culminating in the Israeli invasion at the turn of the year, which laid waste much of the Strip's fragile infrastructure. But the hitherto untold story of the great Gazan tunnel scam is notable for being self-inflicted and, therefore, particularly depressing for a beleaguered population.

As Omar Shaban, an analyst from a local thinktank, says: "The harm done to Gaza goes well beyond the savings lost in the investment schemes. The tunnels distort Gaza's social structure. They destroy the values that a state requires to function. In fact, they present no values that people can believe in."

The tunnels are not supposed to exist at all. As the war in Gaza ground to a close in January, Israel insisted on a ceasefire condition that the subterranean network be closed.

Yet there are now scores of them - more than ever before - snaking ever closer to each other. On the Egyptian side, bribes and an unwillingness to close off Gaza keep open the tunnels and smuggling routes. Analysts say that Israel knows this full well, but finds their existence convenient because they take pressure off the argument for reopening the Gaza crossings.

What comes through the tunnels is what keeps Gaza afloat economically. Metal ladders lead down brick-lined shafts into layers of shored-up sandy tunnels through which are winched bags of cement, cigarettes, cheese, children's bicycles and car parts. Even herds of lowing cattle are led through the larger workings.

Above ground, amid the Israeli bomb craters and ruined houses where the tunnels begin, their entrances are patrolled both by their owners and black-clad men from Hamas.

It is easy to see the smuggling routes as a heroic resistance to a crippling economic blockade. But many Gazans now reject the tunnels' status as an indispensable lifeline. In the most recent incident, investors in a tunnel scheme being promoted by one Ihab al-Kurdi were informed that their money was "gone" - without explanation.

To add insult to injury, they were pressurised last week into signing confidential contracts with Kurdi's "company" offering them 16.5% of the money they put in, in exchange for not complaining, an offer many investors apparently felt they could not refuse.
Posted by Zafar Khan at 14:27