How Israel brought Gaza to the brink of humanitarian catastrophe 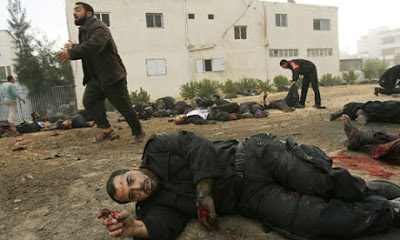 Oxford professor of international relations Avi Shlaim served in the Israeli army and has never questioned the state's legitimacy. But its merciless assault on Gaza has led him to devastating conclusions

The only way to make sense of Israel's senseless war in Gaza is through understanding the historical context. Establishing the state of Israel in May 1948 involved a monumental injustice to the Palestinians. British officials bitterly resented American partisanship on behalf of the infant state. On 2 June 1948, Sir John Troutbeck wrote to the foreign secretary, Ernest Bevin, that the Americans were responsible for the creation of a gangster state headed by "an utterly unscrupulous set of leaders". I used to think that this judgment was too harsh but Israel's vicious assault on the people of Gaza, and the Bush administration's complicity in this assault, have reopened the question.

I write as someone who served loyally in the Israeli army in the mid-1960s and who has never questioned the legitimacy of the state of Israel within its pre-1967 borders. What I utterly reject is the Zionist colonial project beyond the Green Line. The Israeli occupation of the West Bank and the Gaza Strip in the aftermath of the June 1967 war had very little to do with security and everything to do with territorial expansionism. The aim was to establish Greater Israel through permanent political, economic and military control over the Palestinian territories. And the result has been one of the most prolonged and brutal military occupations of modern times.

Four decades of Israeli control did incalculable damage to the economy of the Gaza Strip. With a large population of 1948 refugees crammed into a tiny strip of land, with no infrastructure or natural resources, Gaza's prospects were never bright. Gaza, however, is not simply a case of economic under-development but a uniquely cruel case of deliberate de-development. To use the Biblical phrase, Israel turned the people of Gaza into the hewers of wood and the drawers of water, into a source of cheap labour and a captive market for Israeli goods. The development of local industry was actively impeded so as to make it impossible for the Palestinians to end their subordination to Israel and to establish the economic underpinnings essential for real political independence.

Gaza is a classic case of colonial exploitation in the post-colonial era. Jewish settlements in occupied territories are immoral, illegal and an insurmountable obstacle to peace. They are at once the instrument of exploitation and the symbol of the hated occupation. In Gaza, the Jewish settlers numbered only 8,000 in 2005 compared with 1.4 million local residents. Yet the settlers controlled 25% of the territory, 40% of the arable land and the lion's share of the scarce water resources. Cheek by jowl with these foreign intruders, the majority of the local population lived in abject poverty and unimaginable misery. Eighty per cent of them still subsist on less than $2 a day. The living conditions in the strip remain an affront to civilised values, a powerful precipitant to resistance and a fertile breeding ground for political extremism.