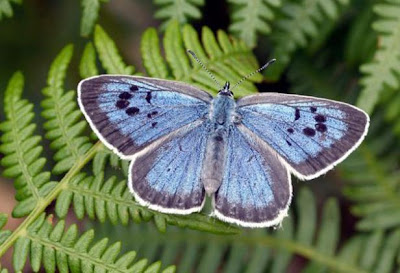 Allah shows us different miracles in our everyday life. Read this story and see how complex his creation is:

It flutters across a hillside in Somerset – the lovely blue butterfly that came back from the dead. And the man who brought it back is watching, celebrating 25 years of its resurrection.

The return of the large blue, which went extinct in Britain in 1979, is one of the great conservation success stories, and the 25th anniversary of its reintroduction is being celebrated today at Montacute House, the Somerset stately home in the heart of large blue country, by Britain's leading conservationists, headed by Sir David Attenborough.

What they will be celebrating, in fact, is the work of Jeremy Thomas, Britain's leading butterfly expert, who discovered the way to bring back a creature which has the most astonishing life cycle of any British insect – it spends most of its life as a caterpillar inside an ants' nest, and without the ants, it cannot turn into a butterfly.

As a young researcher, Professor Thomas, as he now is, discovered which species of red ant has this relationship with the large blue (and there is only one) and then worked out how to keep the ant colonies flourishing. It was a question of having the grassland where they lived grazed very short, so it would remain warmed by the sun. If the grass was only a few centimetres too long, the ants would disappear, and with it, the butterflies.

Historically, rabbits had kept the grass short, but in the mid-1950s rabbit populations were suddenly devastated by the plague-like disease myxomatosis. On many large blue sites, the turf grew too long and the butterfly began rapidly to die out – although no one had any idea why.

It took Jeremy Thomas six summers of work on the very last of the large blue sites, on the edge of Dartmoor, from 1972 to 1977, to unravel the chain of events which was leading to the rapid demise of one of Britain's most beautiful wildlife species.

He was just too late to save it. But the knowledge to bring it back and keep it was now in place; and in 1983, working with another butterfly conservationist, David Simcox, he brought large blue caterpillars from Sweden and released them on the Dartmoor site; they emerged as adult insects the following summer.

In one of the first revealed verses of the Qur’an, God drew the attention of the Arabs to the camel, a part of their everyday lives:

[Have they not looked at the camel-how it was created?
And at the sky-how it was raised up?
And at the mountains-how they were embedded?
And at the earth-how it is spread out?
So remind them! You are only a reminder.] (Al-Ghashiyah 88:17-21)

In many other verses of the Qur’an, people are instructed to examine nature and learn from it because people can know God only by examining His creations. Because of this, in one verse of the Qur’an Muslims are defined as people who think about the creation of the heavens and the earth:

[Those who remember God, standing, sitting and lying on their sides, and reflect on the creation of the heavens and the earth (saying): “Our Lord, You have not created this for nothing. Glory be to You! So safeguard us from the punishment of the Fire.”] (Aal `Imran 3:191)

As a result of this, for a Muslim, taking an interest in science is a very important form of worship. In many verses of the Qur'an, God instructs Muslims to investigate the heavens, the earth, living things or their own existence and think about them. When we look at the verses, we find indications of all the main branches of science in the Qur’an.

For example, in the Qur’an, God encourages the science of astronomy:

[He who created the seven heavens in layers. You will not find any flaw in the creation of the All-Merciful. Look again-do you see any gaps?] (Al-Mulk 67:3)

In another verse of the Qur’an, God encourages the investigation of astronomy and the composition of the earth that is the science of geology:

[Do they not look at the sky above them? How We have made it and adorned it, and there are no flaws in it? And the earth, We have spread it out, and set thereon mountains standing firm, and produced therein every kind of beautiful growth (in pairs), To be observed and commemorated by every devotee turning (to God).] (Qaf 50:6-8)

[It is He Who sends down water from the sky from which We bring forth growth of every kind, and from that We bring forth the green shoots and from them We bring forth close-packed seeds, and from the spathes of the date palm date clusters hanging down, and gardens of grapes and olives and pomegranates, both similar and dissimilar. Look at their fruits as they bear fruit and ripen. There are Signs in that for people who believe.] (Al-An`am 6:99)

In another verse of the Qur’an, God draws attention to zoology:

Here is a Qur’anic verse about the sciences of archaeology and anthropology:

[Have they not traveled in the earth and seen the final fate of those before them?] (Ar-Rum 30:9)

In another verse of the Qur’an, God draws attention to the proof of God in a person's own body and spirit:

[There are certainly Signs in the earth for people with certainty; and in yourselves as well. Do you not then see?] (Adh-Dhariyat 51:20-21)
Posted by Zafar Khan at 21:21