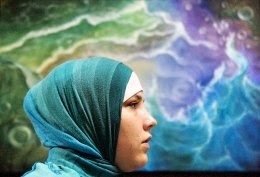 Wall, a 20-year-old sociology and English senior, decided to assume the characteristics and attire of a “typical” Muslim woman for a year starting in late April.

She wears the traditional veil, or “hijab,” and loose-fitting clothing everywhere she goes and does not consume pork or alcohol in public. She avoids eye and physical contact with men and has adopted modest habits like walking with her arms glued to her sides or crossed in front of her to hide her chest.

I witnessed the looks Wall gets on a daily basis when we met at Kerbey Lane on the Drag recently.

She’s wearing a hijab splashed with vibrant shades of green and blue. A long-sleeved, black shirt and floor-length aqua skirt reveals only a few inches of skin.

Some who pass us try to be inconspicuous with their intrigue, limiting themselves to quick side glances. But most don’t even try to be candid with their exaggerated double-takes or blatant stares.

She passes by a group waiting to be seated, and all of them stare at the back of her head as she walks away. One guy even rolls his eyes.

“It doesn’t surprise me,” she says when I tell her about the group. “But look around. They’re not the only ones.”

She insists her decision is not a social experiment but more of a personal learning experience. As a white female from a small, West Texas town, Wall says she wanted to know what it would be like to be part of a “noticeable minority.”

“I’m not representing Muslim women or the Muslim community,” she says. “I just want to know what it’s like to walk in their shoes for a while.”

Initially, Wall elaborates on her “learning experience” when people would ask her questions, the most common being “So, where are you from?” She has abandoned these efforts. Now, when people ask about her attire, she simply says she is not Muslim but wears the hijab because she chooses to do so.

This explanation is not entirely untrue, as Wall admits to not being able to leave her home without the clothing.

“I decided a while ago that I was going to try and not wear the hijab for 24 hours,” she says. “I couldn’t even make it for half that.”

Wall says she receives different reactions when she wears the hijab. A man once fell into a display at Wal-Mart because he was staring at her. One day a group of male patrons at the restaurant where she works refused to be served by her. The same group called her derogatory names. But most of the time she said she is just respectfully avoided.

“I wouldn’t say guys don’t hit on me, but they do so in a very different way now,” she says. “It’s more respectful, less forward.”

The experience has taught Wall to pay attention to smaller details that would make a traditional Muslim lifestyle difficult to follow in the United States.

One day at a clothing store, Wall had to ask for a sheet to cover a gap between the floor and dressing room door so she could hide her bare legs as she changed. Her job as a waitress presents one of the most awkward situations as it naturally entails a lot of physical contact with strangers, which is not allowed for Muslim women, she said.

Wall has grown to appreciate this sort of privacy and, in some ways, respect it. Perhaps the most unexpected outcome of the experience is a newfound devotion to her Christian faith. The Islamic faith requires followers to pray five times a day, the first prayer being at 5 a.m. Though Wall has not yet assumed this tradition, she admits she may in the future, and finds herself praying more often.


Read the complete article at The Daily Texan.
Posted by Zafar Khan at 22:53