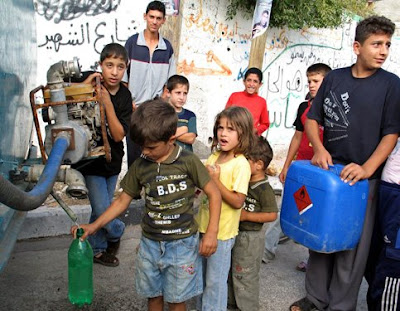 A deepening drought in the Middle East is aggravating a dispute over water resources after the World Bank found that Israel is taking four times as much water as the Palestinians from a vital shared aquifer.

The region faces a fifth consecutive year of drought this summer, but the World Bank report found huge disparities in water use between Israelis and Palestinians, although both share the mountain aquifer that runs the length of the occupied West Bank. Palestinians have access to only a fifth of the water supply, while Israel, which controls the area, takes the rest, the bank said.

In some areas of the West Bank, Palestinians are surviving on as little as 10 to 15 litres a person each day, which is at or below humanitarian disaster response levels recommended to avoid epidemics. In Gaza, where Palestinians rely on an aquifer that has become increasingly saline and polluted, the situation is worse. Only 5%-10% of the available water is clean enough to drink.

The World Bank report, published last month, provoked sharp criticism from Israel, which disputed the figures and the scale of the problem on the Palestinian side. But others have welcomed the study and its findings.

Gidon Bromberg, the Israeli head of Friends of the Earth Middle East, said there was a clear failure to meet basic water needs for both Israelis and Palestinians, and that Israelis were taking "the lion's share".