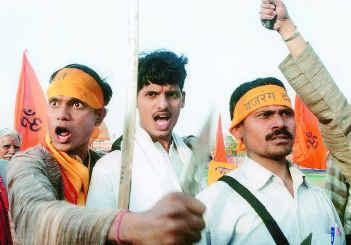 Interesting article from The Guardian.

There is a profoundly disquieting myth about Hinduism which has been put about by its adherents so often and so successfully that it is in danger of crystallising into a truth – that of its essentially pluralistic and tolerant traditions. Recently this viewpoint was repeated in the Face to faith column of this newspaper by Nitin Mehta who argued that "There are thousands of sects within Hinduism, and violence between them is unknown." This is, at best, disingenuous and, at worst, dishonest. He appears to gloss over the troublesome fact that caste Hindus have been callous towards their own – the Dalits or the "Untouchables" as they were previously known. To argue that they are not a sect would be pure semantics.

Nitin Mehta uses a piece of sophistry to suggest the superiority of Hinduism particularly vis-à-vis Islam without once mentioning Islam by name. He refers to the tolerance of religions that have their roots in India namely, Hinduism, Buddhism, Sikhism and Jainism – thereby implicitly damning Islam as a "foreign" imposition and as intolerant. Well here are the facts: Islam in India dates back to at least the 7th century. A presence of 1400 years is surely long enough to put down roots; there were nearly 10,000 cases of recorded crimes against Scheduled Caste and Scheduled Tribe members in 2007 and we know that most crimes do not get recorded in India because of a corrupt and brutal police force; many Indians are still reeling from the massacre of Muslims in Gujarat in 2002, one of several over the years; and only last year vicious attacks in Orissa left at least 60 Christians dead. It is little wonder that in the recent elections in India, many parties and political candidates defined their agendas in opposition to the BJP (Bharatiya Janata party), the political face of Hinduism.

Far from being sprinkled with the magic powder of tolerance, all those religions that rubbed shoulders with Hinduism picked up its divisive caste system. Even South Asian Muslims, despite the emphasis on egalitarianism in the Qu'ran, have a caste system. Sikhism, when it was founded by Guru Nanak, was an explicit rejection of both Hinduism and Islam, especially the caste system. Yet Sikhism is also polluted by the strictures of caste, not just in India but the world over. Gurdwaras or Sikh temples serving various Sikh castes have been flourishing in the UK from the time that Sikhs began settling here.

The recent killing of the Sikh Guru, Sant Ramanand, a Ravidassia (Dalit) Sikh in Vienna by higher caste Sikhs is a shocking reminder of the strength of these traditions even in small diasporic communities in Europe.

The gift of the caste system by Hindus to well over one-fifth of the world's population wipes out the beneficial impact of any wisdom in its philosophical traditions. Until caste is eradicated, anyone trying to claim the mantle of tolerance for Hinduism must be opposed and challenged.