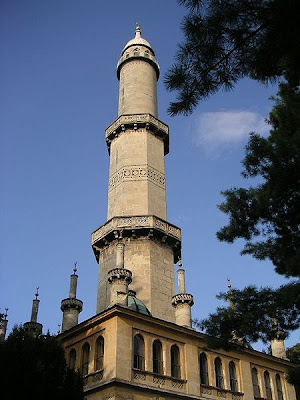 Mosque in Lednice (Czech Republic) garden
Not so long ago the words Czech and Muslim were two polar opposites and it would be almost unthinkable to use them together. But now, two decades after the fall of the Communist regime in Czechoslovakia, Muslims are increasing in numbers, becoming more active and founding new organisations to represent them.

He said the numbers of Muslims are slowly but surely growing in the Czech Republic.

"The prayer hall is so overcrowded every Friday that we have been forced to have two Friday prayers and lectures so that all the Muslims can even fit."

The mosque had to hire a sports hall for `Eid Al-Adha, one of the two main religious festivals on the Islamic calendar which was celebrated in December, to accommodate the record-breaking number of 1,500 Muslims who showed up.

The increase of Muslims is linked to the growing number of Czechs embracing the Muslim faith.

"In our mosque in Prague we are honoured and happy to witness a new conversion almost every week," says Sanka.

The first official Muslim organisation, the Islamic Foundation, was established in 1991.

In 1998 it opened its first mosque in Brno and then one year later in Prague.

There were also attempts to build mosques in smaller cities, mainly Spa towns which are popular with Arab clients, but these plans were met with resistance from both the public and churches.

Islam itself was not legally accepted as a religion by the Czech state until 2004.

Until recently, the mosques in the cities of Brno and Prague were the only official bodies representing Muslims in the Czech Republic.

But now new organisations are appearing to meet the needs of the growing and increasingly diverse Muslim community.

Mohamed Abbas is a well-known media figure and publisher of Islamic literature, including the Qur’an and a translation of Riyad us Saaliheen, the only book of hadith so far published in the Czech language.

Abbas is now also one of the founders of a new organisation called the Islamic Community, whose aim is to provide more activities for Muslims.

Currently the Islamic Community is in the process of securing 300 signatures needed to become officially recognised, which will make it the second Muslim body in the Czech Republic eligible for state funding.

"At the moment organizations here represent only a marginal number of Muslims in the country and do not include everybody," Abbas told IOL.

"We want to change this and create an organization for all, and one that is truly democratic and transparent."

Abbas is optimistic about garnering the needed 300 signatures.

"The number of Muslims here is definitely increasing, especially after Czech Republic joined the EU, and they are interested in seeing an active organization serving them."

State registration will give the organization a wider scope.

It will be able to rent, build and manage Islamic centers, establish Islamic schools and after 10 years it can ask for other special rights like taking care of the spiritual needs of Muslims in the army and jails as well as support of state for Islamic marriages in mosques.

Another completely new organization, which is quite different from the ones already being set-up, is a new Facebook Group called Muslims from Czech Republic, created by 21-year-old fresh convert Jitka Cervinkova.

When Jitka first embraced Islam in September of last year she searched Facebook for a group of Muslims in her country.

When she didn’t find any, she decided to create one.

Since its creation in November 2008, the group has grown rapidly and now has over 300 members.

"I think Facebook is great for meeting other Muslims as I don’t really go to the mosque here in Prague because it is too far for me and it seems that women there are mainly mums with children," she told IOL.

"I didn’t meet any young girls of my age when I visited."

Now Jitka, along with other administrators of the group, are faced with the great responsibility of becoming leaders of the fastest growing, and perhaps most influential, Muslim group in the country.

"I feel the Muslim community in the Czech Republic is growing at great speed, although I don’t know any statistics I feel I meet more and more young Muslims here every day."

The Facebook group has attracted mainly a young generation of people and consists of both Czech converts and Muslims from other countries, such as the Arab world or Bosnia, who are living or studying in the Czech Republic as well as non-Muslims who are interested in Islam.

Jitka, who is usually busy studying for a degree in Middle Eastern Studies and Arabic, now also finds time to organise events and post topics to the group.

So far the group has hosted social events for its members and has also organised a film viewing for the general public.

Volunteers from the group translated a film about Islam from English and answered questions about Islam to the non-Muslim audience.

"We have ideas for many projects and events," said Jitka, citing the need for funding and sponsors who could be able to help.

"We are hoping to organise an exhibition about Islam, as well as set up information stalls with leaflets and information," she said enthusiastically.

"We want to hold more lectures and generally host events which portray Islam in a positive light to the public."