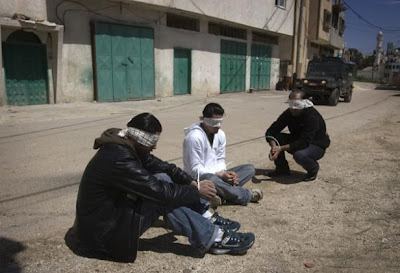 Two Israeli officers have testified that troops in the West Bank beat, bound and blindfolded Palestinian civilians as young as 14. The damaging disclosures by two sergeants of the Kfir Brigade include descriptions of abuses they say they witnessed during a search-and-detain operation involving hundreds of troops in Hares village on 26 March. The testimonies have been seen by The Independent and are expected to add fuel to the controversy over recent remarks by Colonel Itai Virob, commander of Kfir Brigade, in which he said violence against detained Palestinians was justified in order to accomplish missions.

Both the soldiers, from the Harub battalion, highlighted the tight tying of the plastic hand restraints placed on detainees. "There are people who think you need to tighten the restraints all the way, until no drop of blood will pass from here to there," one soldier said. "It doesn't take much time until the hands turn blue. There were a lot of people that you know weren't feeling anything."

He said about 150 Palestinians, some as young as 14, were bound, blindfolded and detained at the village school during the operation, which lasted from 3am to 3pm. He was told it was aimed at preventing village youths throwing stones against nearby settler roads. It was clear many of the people detained had done nothing wrong, but they were held to gather intelligence, he said.

The worst beatings were in the bathrooms, he said. "The soldiers who took [detainees] to the toilet just exploded [over] them with beatings; cursed them with no reason. When they took one Arab to the toilet so that he could urinate, one of them gave him a slap that brought him to the ground. He had been handcuffed from behind with a nylon restraint and blindfolded. He wasn't insolent, he didn't do anything to get on anyone's nerves ... [it was] just because he's an Arab. He was something like 15 years old." The soldier said he saw a lot of soldiers "just knee [Palestinians] because it's boring, because you stand there 10 hours, you're not doing anything, so they beat people up."

A second soldier described a "fanatical atmosphere" during the search operations. "We would go into a house and turn the whole thing upside down," he recalled, but no weapons were found. "They confiscated kitchen knives."

The first soldier said involvement was widespread."There were a lot of reservists that participated, and they totally had a celebration on the Palestinians: curses, humiliation, pulling hair and ears, kicks, slaps. These things were the norm." He said the incidents in the toilet were the "extreme" and added that the beatings did not draw blood. They were "dry beatings, but it's still a beating".

The second soldier said some troops stole from houses they searched, even though the people were so poor it was hard for them to find anything to take.

Read the complete article at The Independent.
Posted by Zafar Khan at 19:58