Food runs out in Swat Valley 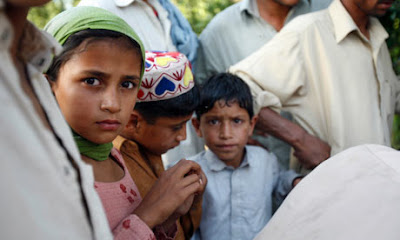 The refugees hurried down the deserted road in the searing midday heat, their suitcases clattering on the tank-scarred tarmac. Waving white flags, they crossed one ghostly village after another. Shuttered shops, destroyed buildings, stray dogs panting in the shade were all passed as the group veered around ­craters in the road.

A warplane hissed overhead, the crump of artillery shattered the silence. At a checkpoint nervy soldiers searched the group – about two dozen men, children and burkha-clad women – at gunpoint. "We have to get out," said Muhammad Tahir, a burly man sheltering under a black umbrella. "No food, no electricity, no gas – we can't take it any more."

Pakistan's army is winning the war in Swat, the tourist idyll turned Taliban fortress. After seven weeks of battle the militants have been driven from their strongholds.

The government says that total victory is imminent. But military success has come at a human price. More than one million people have fled Swat, according to revised government figures. And inside the valley, hidden from the world, a second crisis is brewing.

Tens of thousands of people – nobody is sure how many – have remained in Swat through the fighting, stuck between the army and militants and straining under a strict military curfew.

Last week the Guardian spent three days in Swat, slipping in through rough mountain roads controlled by neither Taliban nor army. The route was littered with the debris of war – a levelled mosque, white smoke billowing from the forests and a destroyed police station at the peak of a desolate mountain pass, blue uniforms strewn outside.

Continue reading at the Guardian.