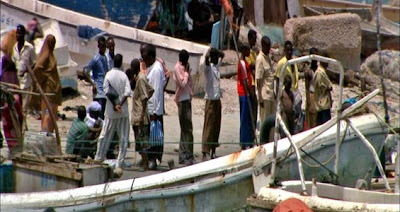 This one is from Al Jazeera:

They don't wear eye-patches or peg legs and you won't find any parrots perched on their shoulders, but they are no less pirates for that.

Twenty-first century piracy Somali style is a far cry from the swashbuckling, sea dogs of old but, in recent months, they have captured both the headlines and the public's imagination.

Their high seas hijackings have also forced the media to focus on Somalia, arguably the globe's most neglected tragedy.

But who are these men and what drives them to carry out such audacious attacks?

I set off to Puntland, the semi-autonomous region in Somalia's north-eastern corner, to find out.

Puntland is one of the poorest parts of war-torn Somalia and it is home to most of Somalia's dreaded pirates.

The pirate's ranks have been swollen by many of the region's youths - drawn by the potentially huge profits of one of Somalia's most successful, if unconventional, business enterprises.

Faced with limited options and even less optimism for the country's future, the young pirates care little about the risks they will run at sea.

In Garowe, the capital of Puntland, I met a well-known pirate; Abdirashid Ahmed - nicknamed Juqraafi or "geography" - still flush from a recent hijacking.

Abdirashid and his colleagues had just taken receipt of a ransom payment of $1.3m after capturing the Greek ship MV Saldanha in February.

"It took us three months of negotiations with the boat's owner before we came to an agreement over the ransom money.

"We initially asked for $17m but compromised and accepted $1.3m when we realised it will take a long time to get more out of the shipping company," he tells me.

However, it was desperation, not greed, he claims, that pushed him to throw in his lot with the pirates.

"We are driven by hunger, just look at our country and how destroyed it is. We are people with no hope and opportunities, that is what is forcing us into piracy," he says.

"Those who have been paid a ransom sponsor the other pirates. For example, if a group is holding a ship and they're paid ransom and then another ship is captured, the first group will fund the second one till they too get ransom payment," says Juqraafi.

The piracy industry is controlled by criminal gangs who recruit local youths and take the lion's share of the profits. They are also well-armed with weapons ranging from Kalashnikovs to rocket launchers.

And every pirate cell, says Juqraafi, has clear policies and guidelines for everything it does - including sharing the ransom.

"The financier is usually a businessman who sponsors the pirates and gets 30 per cent of the ransom. The pirates get 50 per cent," he explains.

"The remaining 20 per cent is given to the poor and all those who, in one way or another, help the pirates on shore and this includes local government officials who expect bribes from every successful venture."

In their search for ships, Somali pirates have spread themselves across thousands of square miles of water, from the Gulf of Aden at the narrow doorway to the Red Sea, to the Kenyan border along the Indian Ocean.

When they started out, Somalia's pirates cast themselves as the "Robin Hoods of the sea" - defenders of the nation's fisheries.

The country's tuna-rich waters were repeatedly plundered by commercial fishing fleets soon after the country's last fully-functioning government collapsed in 1991.

But what began as a deterrent to illegal fishing has today become a free for all.

"These youths are capable of anything," Dr Ahmed Abdirahman, a university professor in Puntland, says.

"If the world does not come up with a solution to piracy, its going to take a far worse turn," he warns.

In 2008 alone, more than 120 pirate attacks occurred in the Gulf of Aden, far more than in any other year in recent memory.

Experts say the Somali pirates netted more than $80m, an astronomical sum for a war-ravaged country whose economy is in tatters.

At least a dozen vessels and crews are currently being held hostage off the coast of Somalia.

As on every issue in Somalia, public opinion on piracy is sharply divided. To some within the community, the pirates are amoral thugs bringing yet more trouble to their shores.

But to others and, arguably, they are in the majority, these modern-day buccaneers are heroes who are robbing the rich to feed the poor.

Nowhere is the support for piracy greater than in the town of Eyl, Somalia's modern-day pirate capital.

Contrary to our expectation of prosperity in Eyl, we were confronted not with palaces but a few crumbling houses - a clear indication that the millions of dollars earned from the lucrative business of hijacking passing ships are not invested in the town.

Despite this, Said Elmi Mohamud, a 55-year-old Eyl resident, began to defend the pirates to us even before we had stepped foot out of our vehicle.

"I know you are here looking for our heroes," he declared.

"I don't call them pirates – they are our marines. They are protecting our resources from those looting them. They are not criminals."

Pirates moor their captive ships off Eyl's beaches and use the town to supply both them and their hostages with food, water and other necessary provisions.

While in Eyl ourselves, we watch from afar as the Dutch-owned MV Marathon was held by pirates a little further out to sea.

Rows of battered boats lie scattered along the beach. They are used by the pirates to shuttle between the port and the ships at sea.

And whenever word spreads that another ship has been hijacked, activity in Eyl moves up a gear.

There is a lot of money to be made and nearly everybody in the town is anxious for a cut. Elders stream into the town to arbitrate disputes between their young clansmen as gold-digging women flock to Eyl from far and near to get themselves a pirate.

But not everyone in Eyl is happy about piracy.

"We hate the pirates but can do nothing about them. They are more powerful than us," Mohammed Khalif, one of the town's Islamic leaders, says.

"Even the international naval powers with all their warships and weapons have not been able to control them."

He also laments the negative impact piracy has had on the town.

"They have troubled us a lot. They have brought us alcohol, commercial sex workers and massive inflation. Lots of killings also take place here," Khalif says.

As piracy in Puntland has become an international issue, so pressure is increasing from within to take action.

Abdirahman Mohamed Mahmoud, Puntland's regional president, took office in January on an anti-piracy platform. He says fighting the pirates is high on his agenda.

He sends his fledgling coastguard to sea and, at night, soldiers mount roadblocks in all of Puntland's major cities.

But Mahmoud says he needs more help to tackle what is now an international problem.

He is critical of the international community's approach to combating piracy, saying they will never successfully defeat the pirates without collaborating with local forces like his own on land as well as at sea.

About 15 international naval vessels, including three American navy ships, patrol Somalia's pirate-infested waters, many under an American-led anti-piracy task force.
Most of the patrol vessels are concentrated in the Gulf of Aden and, as a result, the pirates have adapted, simply moving further into open seas.

"We need just a small fraction of the money the naval fleets are wasting now to effectively combat piracy. I think they are not interested in fighting piracy," Mahmoud says.

Religious leaders from all over Puntland have also embarked on a mission to battle the buccaneers. And what better place to try to reform pirates than in Eyl.

At the town square they hold an assembly. Their sermons focus on the vices the pirates have introduced with the money they earn.

But not far from where they are preaching, business is brisk.

At Eyl's restaurants, women eagerly serve the pirates, their accountants, middlemen and negotiators. Their four-wheel drive vehicles are never far away.

They are, undoubtedly, the kings of Puntland.