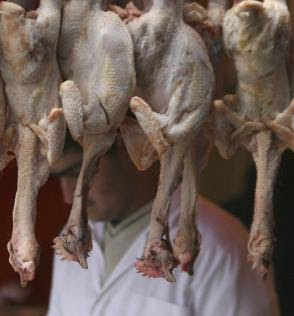 According to the Independent, UK, Chicken injected with beef and pork waste is being sold in UK:

Cafes and restaurants across Britain have been selling chicken secretly injected with beef and pork waste.

In a hi-tech fraud run by firms in three EU states, food manufacturers are making bulking agents out of porcine and bovine gristle and bones that help inflate chicken breasts, so that they fetch a higher price.

The swindle was only detected by the Food Standards Agency (FSA) using new scientific techniques because the non-chicken material had been so highly processed it passed standard DNA tests.

Thousands of restaurateurs and cafe owners are likely to have been conned into buying chicken containing the powder – which binds water into chicken breasts – while diners have been unwittingly consuming traces of other animals when eating out.

The Hindu Forum of Britain described news of the adulteration, which will be confirmed publicly today, as "shocking and potentially very distressing". Its secretary general, Bharti Tailor, said: "Eating beef is expressly forbidden because cows are considered to be sacred as they are a representation of the bounty of the gods, even unknowingly. The fact that the protein powders injected into chickens served in restaurants and cafes contain even traces of beef or pork is horrific. And [the fact] that Hindus will have been eating beef contaminated chickens will be mentally agonising. Many will feel that they have broken their religious code of conduct."

The food regulator acknowledged the serious consequences of its findings. "Use of these proteins does not make chicken products unsafe, but it is important that people are given accurate information about their food," the FSA said.

The fraud has been taking place for at least the past two years, and still continues because of inaction by the authorities in three EU states, believed to be Germany, Netherlands and Spain.

The European Commission rebuffed British demands to ban beef and pork proteins from being added to chicken when first detected in the UK and Ireland in 2001 and 2003. Then, action was taken against a chicken company in the Netherlands and the authorities thought the problem had gone away.

When complaints began to surface again last year, the FSA launched a secret investigation to ascertain whether chicken – the most eaten meat in the UK – was being adulterated again. At first, scientists could not find any non-chicken protein because the meat had been "de-natured" (made unrecognisable). The Central Science Laboratory in York and York University developed special DNA market tests.

"It's like Olympic drug tests; they stay one step ahead of the testers," said a source close to the investigation.

Manufacturers in Germany and Spain are thought to be making the protein powders; Dutch firms inject them into chickens sold on to UK wholesalers supplying the catering trade.

Tests picked up traces of beef in one of three chicken breasts.

It added: "Certification accompanying the powders claim they are produced only from a poultry source, however, the analytical results suggest this claim could not be substantiated."

Manufacturers can legally add water to chicken, for instance to improve succulence, but must declare water content of above 5 per cent. Fresh chicken meat sold by supermarkets or butchers cannot have any added ingredients. When the FSA alerted its continental counterparts, the factories involved were inspected but no legal action has been taken.

Some chicken products state on the label whether they contain hydrolised (chicken) proteins. The FSA advised consumers that they "may wish" to avoid such chicken. "If you are eating food from a restaurant or takeaway you should ask if the chicken served contains hydrolysed animal proteins," the FSA will say today. "Restaurants and catering establishments will have this information available to them."

Sue Davies, chief policy adviser at the consumer group Which?, said: "It's bad enough that when you think you're buying chicken what you're paying for is an awful lot of water and other animal proteins but if you want to avoid beef or pork for religious reasons it's going to be particularly shocking and annoying. There's a need for better enforcement action, or people will carry on doing this."
Posted by Zafar Khan at 19:34