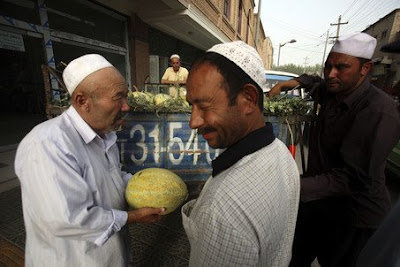 Micheal Jackson funeral is taking place at the moment and all the news organisations are covering that. I can see people crying at the loss and it seems as the end of world for many people. Maybe this is a big event but there are other big events going on today.

Today is four years since the London Bombings took place. A memorial has been erected in memory of those who lost lives in this mindless act of violence. One of the women was an Israeli women who was too afraid to live in Jerusalem and was scared that she could be a target in a suicide blast. She was one of the victims. This reminds us that death can come regardless of whenever and wherever we are.

Right now there is lot of problems for the Uighurs, who are Chinese Muslims. A lot of them may not describe themselves Chinese because of the delibrate policy of discrimination, ethnic and cultral cleansing and land grabbing policies of the Chinese government. 156 people have been killed and over 1500 in custody.

The Han Chinese who have been taking over the East Turkestan province with the help of the government has now added salt to injury by smashing up Uighur stores. They burned the restaurants, mosque, etc. Curfews have been imposed but that probably means more Uighur deaths.

China wants to project itself as superpower but it should first sort its own house before thinking of itself as a super-power.

In the meantime please pray for Uighurs and lets hope Allah will help them and reduce their suffering, Inshallah.
Posted by Zafar Khan at 18:27