The Hijabi MP of Belgium 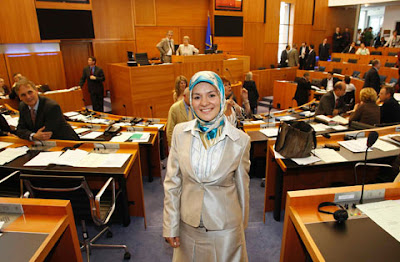 Brussels, Asharq Al-Awsat- When I met Mahinur Ozdimer in one of the biggest shopping malls in Brussels just one day before the Belgium elections that took place on June 7, I noticed that she was the only female candidate wearing Hijab as the candidates handed out leaflets and met and spoke with voters.

I asked Mahinur “Aren’t you worried about the reaction you’ll get from Belgian voters because you wear Hijab?” Ozdemir, a Belgium citizen of a Turkish descent, answered, “I will not take off my Hijab for the elections or for parliament. I wore the Hijab when I was working for Schaerbeek Municipal Council and I will carry on wearing it even in parliament.”

Despite the pressure she is subjected to because she continues to wear the Hijab, Mahinur always says that “efficiency alone is what matters, not the Hijab.”

Mahinur is the first parliamentarian to wear Hijab, but there is a problem; Belgian law does not allow MPs to wear headscarves in parliament. The issue has begun to raise controversy among members of Arab and Muslim communities and amongst the Belgians themselves.

MP Suad Razzouk from Belgium’s Socialist Party said, “Ozdemir will face two options: resign if she does not take off the Hijab, or give up her seat in parliament.”

Ahmed Mohsen, a member of the Green Party, said “I will work towards changing the current status as the right-wing, liberals and socialist parties caused the banning of Hijab in 95 per cent of Belgian schools with only five schools allowing it.”

The Socialist Party’s MP Sofia Bouarfa said, “I am concerned about the future of every female candidate who wears Hijab and wants to run for parliament because that person will face major challenges and difficulties. She is supposed to represent all parts of Belgian society and it is only normal that not everybody will be considerate of the fact that wearing Hijab is a personal freedom.”

In every interview, Mahinur has insisted that there should not be so much emphasis on the Hijab that she wears but on the issues that are of importance to a Belgian citizen, mainly unemployment and housing.

Mahinur said, “I will work against unemployment and towards allowing the Hijab to be worn in the workplace and in schools.” She added, “I would like to point out that with or without Hijab, my view of the problems in this country and finding solutions to them and helping others will be the same. I cover my hair, but not my ideas, and the Islamic headscarf will in no way be an obstacle to my political activity. It should not be a controversial issue and I would advise those criticizing the Hijab to do away with the injustice that obscures their vision.”

Mahinur emphasizes that she is a Belgian of Turkish and Muslim descent by saying, “I was born here in Belgium and raised and educated in this country. I’m a third-generation immigrant and I come from a family that is devoted to serious and sincere work. My family supported me and celebrated my success in the elections.”

There is a large Muslim community that consists of at least half a million people in Belgium, the majority of which are Moroccans and Turks. The first generation of immigrants arrived in Belgium in the late 1950s to help rebuild the country following the destruction caused by World War II.

Mahinur got to a point where she avoided answering questions about Hijab after she found that there was too much focus on this issue, especially when it came to questions on the attitudes of her fellow party members towards her and whether people were open to the idea of a parliamentarian wearing Hijab. There was an incident during her party’s election campaign; the party had put up pictures of the candidates in Schaerbeek and Mahinur’s picture was enlarged so that people could only see her face, not her Hijab.

Commenting on the incident, Mahinur said, “The party officials explained that a mistake had been made either by the printing company or by an employee working on the election campaign, either of whom did not consult anyone else regarding the matter. I was angry but I am not now after the party explained the situation.”

There has been debate over the name of the party to which Mahinur belongs. The foreign media calls it the ‘Christian Democratic Party’ whilst a number of party members of Arab descent state that this is incorrect and that the correct translation of the party’s name is the ‘Humanist Democratic Centre.’

Taha Adnan, who works for the administration of the francophone government in Brussels, said that in 2002, the Christian Democratic Party changed its name to ‘Humanist Democratic Centre’ [CdH] and as a result, it lost the votes of many Christians in Belgian society. But in turn, it gained votes from a number of Arab and Muslim immigrants.

But how did Mahinur get into politics? When did she join the party? When did she decide she wanted to enter parliament and how did she choose which party to join?

“When I was a child, I always dreamt of being a lawyer, but I started wearing the Hijab at 14 years old, so I had to reconsider my future. So I chose to study Political Science at the Free University of Brussels, with a major in Human Resources, and I obtained a diploma in Management…My decision not to study law was not because it was too difficult, as I’m not the kind of person who gives up. Even if became a lawyer I would have entered the world of politics, which I came to understand quite well during my free time at the university through the internet.”

Mahinur stated that she read the programs of various Belgian political parties and liked the CdH, which calls for offering social aid, and upholding democratic principles and family values. “It is enough that it is a moderate party as I hate extremism, and the party’s program has a lot of respect for religious beliefs.”

Mahinur joined the party in 2004 when she was still studying. The following year she was offered the opportunity to take part in the municipal elections as part of the party and she joined the municipal council of Schaerbeek, which has a large number of citizens of Arab and Muslim descent, mainly Moroccans and Turks.

In the recent elections Mahinur ranked 21st, which was enough to guarantee a seat in parliament. In reference to her family, Mahinur said “They helped me a lot and gave me support. They are very happy for me.”

Describing her as a very eloquent speaker, the Belgian press says that Mahinur has a lot to say on social issues and social development.

However, the elections are over and the winners have been announced. Mahinur is now waiting to take the constitutional oath as the first parliamentarian in Belgium to wear Hijab though this goes against Belgian law.

Mahinur believes that she will be a member of parliament in Brussels alongside a number of Muslims who were chosen by the Muslim community living in the Belgian capital to represent them. The issues that they want dealing with include the banning of the Hijab in some schools, the prohibition of slaughtering animals at home for the religious festival of Eid al Adha or any other day, and the issue of financial aid required for Islamic associations to help them carry out their religious duty of serving members of Muslim communities.

MP Fatiha Saidi, a Belgian of Moroccan origin born in Algeria to Moroccan parents, says that she focuses on the issues of all races without discrimination and that her primary goal is to serve the oppressed, especially those with no residence permits or those who are jobless, and those who have problems with schooling and education etc.

Saidi said, “I have intervened in parliament with regards to the issue of slaughtering animals during the Eid festival or on other days. I raised questions on the matter in parliament and I questioned the Belgium Minister of Justice on racism in the Belgium labour market, the oppression that Muslim communities suffer and discrimination in the employment field.”

Saidi indicated that she has prepared a report to this effect to be discussed in parliament and that she has also raised the issue of Hijab in schools; “Discussions on this are still underway.” Finally, Fatiha Saidi added, “The Belgian people we work with do not share the same experiences or circumstances that Muslim communities experience such as nostalgia, racism and migration. This is why it is our role to clarify the nature of such problems to others through different means such as seminars and lectures within the party to which I belong or in parliament or during sessions, as well as in magazines, party-affiliated and independent newspapers.”

Mohamad Daif, of Moroccan descent, was one of the first Muslims to enter Brussels parliament following the 1995 elections. Daif said, “The religion of Islam is acknowledged here in Belgium and there is a representative body that is recognized by the Belgian government despite the strong criticism against it from some Belgium parties that refuse to recognize this body or Islam as a religion. As a Muslim citizen, I am of the view that the executive body for Muslims must have the ability to work and achieve the goals for which it was established, and that there must be enough finance to provide for this. Towards this end, my role in the party to which I belong – the Socialist Party – and my role in parliament has been to work towards eliminating any kind of racism by providing finance to different bodies and ensuring a fair share of financial aid to different institutions so that it can achieve its goals.”

It is clear that Mahinur has a lot of work ahead of her regarding the problems in the Muslim community but the important question remains; how will this parliamentarian escape the dilemma that lies ahead? Will she give up the Hijab? Or will the Brussels parliament turn a blind eye and let her take the oath and amend that specific article of the constitution? Deliberations to this effect are underway between different parties, and we will soon know the answers to those questions.