Life with a control order 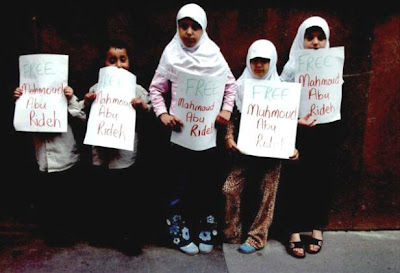 Mahmoud Abu Rideh has spent four years behind bars and another four years on a control order. A father of six, he is in a wheelchair and has never seen the evidence against him. Today he goes to the High Court, backed by Amnesty International, in a plea to leave Britain. Here Dina Al Jnidi, his wife, describes the family's descent into a nightmare

It is still fresh in my mind the day the police came to arrest my husband – it was the 19 December 2001. They broke down the door and forced their way into our home while I was still in my night dress. They were pointing their guns in my face and in the children's faces. There were about 30 armed officers. They forced my husband to the floor and handcuffed him, pressing down on his back and neck with their knees as he screamed in pain. They yelled: "Shut up you f***ing terrorist!" I implored the police to stop because my husband suffers from back pain. All this was in view of my children who were terrified; they were crying, shaking, many had wet themselves .

The police took my husband away – to where, I do not know. They took me and my children to a hostel; they wanted to search our home.

After two days we were allowed to return home. The local newspaper had taken pictures of our house. The headlines read something like: "Terrorist raid". After this article I had my face veil forcibly removed three times. We also had rubbish thrown at our front door.

Forty days passed and I still did not know where my husband was. I called the police, immigration – no one told me where he was.

Eventually I swapped my home because our neighbours had resorted to spitting at me. Prior to the arrest of my husband and the raid on our home, we had never had any trouble with our neighbours. The police have caused this problem which led to our victimisation.

I finally found out my husband was in Belmarsh prison and I went to visit him there. I discovered he was on a hunger strike. The visit was a closed visit, which means that neither I nor my children could touch him. The children were unable to hug or hold their father. Even shaking his hand was not allowed. On many occasions after travelling long distances in difficult circumstances we were sent away without being allowed to see him. My husband does not speak English well, but he was not allowed to speak Arabic (eventually this was allowed for one visit out of four).

My husband used to call and often he would be crying due to the torture and the discrimination he was facing. My children, too, would cry. The effect of all this torture, discrimination, and detention without charge or trial drove my husband insane, angry and psychologically mad. Never before was he like this, he was a normal person – a normal husband and a normal father. Due to his mental state he was transferred to Broadmoor psychiatric hospital, a place for dangerous high-risk people.

While at Broadmoor, he was frequently attacked by staff, nurses and other prisoners. I could not visit him there. I tried, but whenever I went I was told he was in isolation, in solitary confinement.

Broadmoor was far from our home, it was difficult travelling with five children only to be sent home.

It was around this time that my husband began to self-harm. He drank detergents, he used pens to dig deep into his arms.

He was finally released in 2005. We were given only two hours' notice before his return. We were pleased to have him back home, but did not know the full extent of the conditions that would be placed on him. I did not know what a control order was. He had to wear an electronic tag around his ankle. He had to report in several times a day (including the middle of the night) using special equipment that had been placed in our home. We were not allowed to have a digital camera in the home, nor other basic items such as USB sticks, memory cards or MP3 players. Our children were not allowed to use the internet or have a computer. We were not allowed visitors unless they had been cleared by the Home Office after a rigorous vetting procedure. Many would not even call for fear of being harassed by the police or worse.

My husband was a wreck, a shattered man. He could not sleep, he would sweat and shake, he would have nightmares and flashbacks. It was almost impossible to deal with him. He was ill and had complex psychological needs – I am not a trained nurse and he required specialist help. One week later he attempted suicide by taking an overdose of his depression and anti-psychotic medications. I found him on the floor unconscious, in a pool of vomit foam coming from his mouth. He was taken to the hospital and remained unconscious for three days.

My life is ruined. I cannot sleep. I cry so much. It is having an effect on my children. I blame Tony Blair, the House of Lords, the Queen, the politicians, Parliament. They all have a have a hand in this. I am British. So are my children. Why, then, is it acceptable for us to be treated in this manner? The police came many times to search my house, violating the sanctity that is a home. What do they expect to find among my clothes and my children's clothes? They confiscated money, a Nintendo Wii, a Playstation, a PSP. The Nintendo Wii was a gift from my husband's solicitor to our children. Despite numerous requests, none of these items have been returned to us. Why? Are my children not allowed the things everyone else's children are?

Even irrelevant documents have been confiscated – birth certificates, school reports, a car log book and MOT certificates. Of what significance or benefit are these?

I was at breaking point. I could take no more. I was pregnant with my sixth child. During my pregnancy the Home Office made things difficult – I could not get help as people required clearance before being allowed to visit me. How could I care for a sick husband and five children while pregnant?

I want to know how the majority of Christians in Britain prepare and share joy at the christening of their newborn children. Am I exempt from sharing my happiness with friends and family? Should I too not be allowed to show off my precious gift to others? Am I subhuman? I want to ask the politicians, the Queen – would this not affect you?

I tried to remain hopeful many times. But there is no hope. My husband has been charged with no crime, he has not been interviewed or interrogated. He has been presumed guilty because he is Muslim – for what other reason could it be? Please explain to me and my family – why have we had to endure this treatment? Pets are treated better than we have been. Is this the humanity you profess, is this the justice you want to spread?

Judge Ousley ordered and ruled that the Home Office should release the secret evidence that is held against my husband. But the Home Office appealed this decision and it has been a long time and nothing has been heard or seen.

On or around the 19 February this year, the European Courts of Justice and the European Court of Human Rights declared that the secret evidence being used against my husband be released to him and his solicitors. They said the control order should be lifted and that my husband should receive compensation for his unfair treatment. What is the point of these courts if Britain makes a mockery of them and refuses to submit to their judgment?

There is no justice. We have lost all hope of justice.

My family, especially our children, are scared of the police. The have suffered at the hands of the police. Their education has suffered. They have not been able to complete homework, they are at a disadvantage compared to other children as they are not allowed to access the internet. I have three girls in secondary school and three boys in primary school. I was attending college to study childcare. We all require a computer.

My husband was re-arrested for alleged breaches of his control order on at least four different occasions. Once he was arrested for having the Nintendo Wii which was the gift to our children. Once it was for having "mobile phones" in the home – they were actually toys purchased from the pound shop.

We, as a family, are dead. We are sick of the police and the Government's torture of our family that has gone on for eight years. Our family has been held hostage in Britain. My husband and I escaped torture at the hand of the Israelis to find worse torture in the UK. I now find myself in another country – J ordan – where I have sought asylum from the torture that Britain has placed me and my family under.

I have too many things to get off my chest. My heart is filled with anger. I am crying as I write this – it is all too much for me to remember. I have left my home to be in Jordan. My husband was not even allowed to accompany us to the airport. He is forbidden under the restrictions of his control order. Is it really likely that he can escape; he has no passport, no travel documents – where would he go?

As we left our home I knew, and he knew, that it was probably the last time we would see each other, the last time he would see, hold, hug and kiss his children. I had to watch my children crying at the thought of never seeing their father again. But I have no choice, I have been forced to leave.

Perhaps now I can try to repair the damage to my children; the emotional scars they will bear for how long I do not know. I can finally try to rid myself of the effects of the "Terrorist Act", the police, the searches and the torture I have had to witness my husband go through.

I still fear for my husband who is alone. He has made four suicide attempts – each time he has been serious. But Allah has not willed that he be successful.

The British public and Government complain about the effects of immigration and asylum seekers in the UK, about people coming to the country and claiming benefits. Why then do you force my husband to remain here? He has not been charged or convicted of a crime, yet you treat him this way .