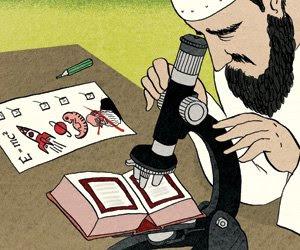 In the annals of aviation history, names such as the Wright brothers, Charles Lindbergh or Chuck Yeager come to mind. But what about Abbas Ibn Firnas?

Very few people know that this Muslim scholar tied himself to a feathered glider in Cordoba, Spain, in the ninth century and took the first piloted flight in history.

John H. Lienhard, a professor at the department of mechanical engineering and history at The University of Houston, acknowledges this flight in his award-winning work The Engines of Our Ingenuity.

A model of this flying machine is on display among many other artifacts at the exhibition Sultans of Science: 1,000 Years of Knowledge Rediscovered, at the Islamic Da’wah Center in Houston through Sept. 7.

The exhibit, which debuted last week, honors contributions of Muslim scientists from the eighth century to the 18th century, known as the Golden Era of the Islamic World.

It focuses on disciplines such as art, astronomy, inventions, optical sciences, mathematics and architecture.

The exhibition offers hands-on activities, re- created models of engineering tools and interactive maps that take visitors back to the medieval ages.

Visitors can grip a pulse sensor to see their heartbeats displayed against the backdrop of Ibn Nafi’s diagram of the human circulatory system. Or they can use a replica of the Islamic quadrant to measure the angle between two stars.

The cluster on optics showcases works of 10th-century Muslim physicist Al-Haytham, who invented the pinhole camera and discovered how the eye works. Visitors can conduct experiments at Al-Haytham’s optical laboratory using convex and concave lenses, prisms and the model of the camera he invented.

Another attraction is the model of the elephant clock designed by Muslim engineer Al-Jazari. This was the first clock that employed the flow of water to regulate timekeeping.

“We knew this nonreligious exhibit would attract people of Houston for its self-guided and non-imposing nature,” said Ameer Abuhalimeh, executive director of the Islamic Da’wah Center.

He said the exhibit was designed to increase awareness of Muslims’ contributions to fields of learning and highlight the importance of building bridges between civilizations.

The exhibition is owned by MTE Studios, based in Cape Town and Dubai, which designed Ibn Battuta Mall, a thematic shopping mall in Dubai. The exhibits at the center are small replicas of ones on display at that mall.

Ibn Battuta was a Muslim explorer from Morocco who traveled 75,000 miles and visited 40 countries in 28 years. The explorers section of the exhibition tells the story of this man.

Abuhalimeh said that to complement the exhibition, the Houston Museum of Natural Science is showing the IMAX film Journey to Mecca, a documentary based on Battuta’s travels.

Joanne King Herring, a member of the exhibition committee, said she hopes this event acquaints people with the works of good Muslims. King said there are good and bad people in every religion. “But all the nice work by good people gets obscured in the smoke of war generated by the bad ones,” she said.

She said she had special interest in the Muslim world, as she had served both Pakistan and Morocco as their honorary consul general in Houston.