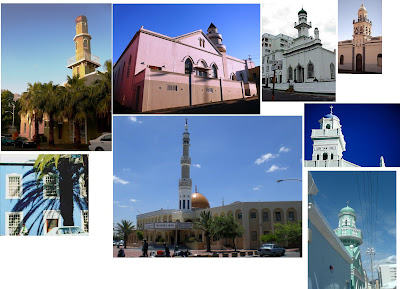 Cape Town is steadily becoming a center of Islamic tourism with thousands of Muslims reportedly flocking to South Africa’s coastal city which has a rich Islamic heritage, including the 10 oldest mosques in all Southern Africa.

"Whenever I and my family think of a holiday trip in the world, we have only one location in mind and that is Cape Town," Edris Muktar, a Malaysian tourist, told IslamOnline.net.

"It’s primarily because of its Islamic culture, rich history and friendliness of its inhabitants."

Sumaya Abdul, a tourist from Indonesia, says she always prefers Cape Town for vacations because of the historical attachment the city has with her Muslim home country.

"Some of my great grandfathers were brought to Cape Town as slaves by colonialists and they brought Islam to South Africa," she told IOL.

"When I’m here, I see the people as my blood connection. So visiting Cape Town is a priority for me."

Cape Town is a home to nearly half a million Muslims of diverse Asian origins.

Muslims make up to 1.5% of South Africa's 44-million population.

Islam was first introduced to the then Cape of Good hope in 1654 by political exiles and slaves working for the Dutch East India Company that operated between Cape Town, Holland and the then East Indies.

Sumaya recalls she was very impressed the first time she came to Cape Town with the so many shops and restaurants offering halal food.

"Nearly all the food in Cape Town is halal."

Muslims should only eat meat from livestock slaughtered by a sharp knife from their necks, and the name of Allah, the Arabic word for God, must be mentioned.

Sumaya says that one particular aspect of the city has captivated her more than anything else.

"There are many mosques on virtually every corner of the street, which is difficult to find in other tourism centers in the world."

There were no mosques in the city until the early 1800’s, when religious freedom was granted by the Dutch colony in 1803.

Of the spectacular Muslim sites that have amazed many tourists in Cape Town are the Auwal and the Palm Tree mosques, the two most ancient Muslim places of worship in the country.

"The Auwal & Palm Tree mosques draw a huge number of tourists because of their ancient history," Farouk Kamalie, chairperson of the Palm Tree Mosque, told IOL.

"Foreign and local Muslims visit our ancient mosques every year."

The same happens with the Auwal mosque, the first mosque in the entire Southern Africa region which was built in 1804.

"Thousands of people from different countries come to this mosque every month, taking pictures, recording videos and also interviewing us," says Abdurrahman, the mosques Tanzanian-origin muezzin (person who calls for prayers).

"I feel proud to be associated with Auwal Mosque."

Kamalie, the Palm Tree Mosque chairperson, insists that as remarkable as they are, mosques are only part of Cape Town’s rich Islamic heritage.

"[Tourists] request us for guides to take them to tombs of some of the first Muslim scholar who died here in Cape Town," he said.