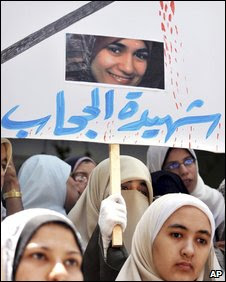 Marwa Sherbini, 31, was stabbed 18 times by Axel W, who is now under arrest in Dresden for suspected murder.

Husband Elwi Okaz is also in a critical condition in hospital, after being injured as he tried to save his wife.

Ms Sherbini had sued her killer after he called her a "terrorist" because of her headscarf.

The case has attracted much attention in Egypt and the Muslim world.

German prosecutors have said the 28-year-old attacker, identified only as Axel W, was driven by a deep hatred of foreigners and Muslims.

Medics were unable to save Ms Sherbini who was three months pregnant with her second child. Her three-year-old son was with the family in court when she was killed.

Axel W and Ms Sherbini and family were in court for his appeal against a fine of 750 euros ($1,050) for insulting her in 2008, apparently because she was wearing the Muslim headscarf or Hijab.

Newspapers in Egypt have expressed outrage at the case, asking how it was allowed to happen and dubbing Ms Sherbini "the martyr of the Hijab".

Senior Egyptian officials and German diplomatic staff attended the funeral in Alexandria along with hundreds of mourners.

Media reports say Mr Okaz was injured both by the attacker and when a policeman opened fire in the courtroom.

"The local council here in Alexandria, the victim's hometown, has decided to name a street after her and the press is describing her as the 'Hijab Martyr'," she said.

"At least two protests are expected to take place in Alexandria and Cairo as this is being seen as a xenophobic and Islamophobic attack.

"People on the street and members of parliament are asking the government not to take the issue lightly."

Hundreds of mourners gathered for the funeral, some chanting "Down with Germany" and scuffling with police, witnesses said.

The German embassy in the Egyptian capital, Cairo, said that the attack was not a reflection of German attitudes towards Muslims.

"It is a criminal act. It has nothing to do with persecution against Muslims," Magdi al-Sayed, a press officer, told the state-run Egyptian Gazette.

But Sulaiman Wilms, the head of communications at the European Muslim Union, said that the incident was at least partly representative of the situation faced by Muslims across the continent.

"It definitely reflects a certain spillover from certain elements of the public-media discourse, but it also reflects the general violence and degredation of order which we have within European societies in these times of global crisis," he told Al Jazeera from Cologne.

"People are looking for victims and Muslims are sometimes seen as a viable option."

Sherbini's family have called for revenge following the deadly knife attack on Wednesday.

"If she was just stabbed once, I would have said this is a mad man, but the number of times she and her husband were stabbed reflects the extent of racism this man had in him," Tarek Sherbini, the victim's brother, said.

"Here in Egypt, we believe in 'an eye for an eye'. The least we expect is the death penalty for the murderer."
Posted by Zafar Khan at 21:58