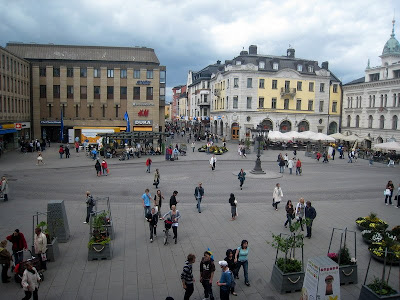 Muslims in Sweden's fourth largest city organised on Saturday, July 18, a special day devoted to introducing the noble traits and characteristics of Prophet Muhammad (peace and blessing be upon him) and addressing media-propagated misconceptions.

"We are presenting one of the world’s most famous persons," Ibrahim Blicksjo, a spokesman for the organizers, told IslamOnline.net over the phone from Uppsala.

"Why? Because we want to spread his message to the people and to give them a fair chance to get to know him."

The day, themed "Muhammad, Messenger of God", is organized by the International Association of Science and Culture, and held in Stora Torget, the biggest square at the heart of the city.

The first of a kind in Sweden, the event will introduce the prophet to Swedes through his life story, message and merciful teachings.

"We will have speakers who will talk about Prophet Muhammad and his message," said Blicksjo.

"We want to shed light on his qualities and how he treated others around him. And most importantly, we want to tell the people what message he came with," he explained.

"We want to show them why we love him so much, what an extraordinary person he is."

The attendees, including local organizations and media outlets, will get free literature about the inspiring life of Prophet Muhammad and how he changed the course of human history.

"We have 10,000 brochures that we will hand out and we will also have books in more than 20 languages," said Blicksjo.

"People will also have the opportunity to ask us questions and get first-hand answers."

Organizers believe the Uppsala event, the first of its kind in Sweden, is much needed because people lack the basic knowledge about Islam’s prophet and message.

"The Swedish society of today does not know much about Prophet Muhammad. They actually know nothing about him," regrets Blicksjo, a Muslim convert.

He heaps the blame for that on the media which propagates only misconceptions and insults about the prophet and Islam.

"Mainly what they know about Islam is what the media writes," says Blicksjo.

"We want to give the right image of Prophet Muhammad to set the records straight and defend him against all lies propagated about him."

In 2007, the Nerikes Allehanda newspaper published a cartoon by Swedish cartoonist Lars Vilks of a person he described as Prophet Muhammad depicted as a dog to illustrate an editorial on self-censorship and freedom of expression.

Muslims in Sweden, estimated at nearly 400,000, took the issue into their strides and refused to internationalize the crisis like Danish Muslims did in 2005 when a Danish daily printed 12 lampooning drawings of the prophet.

Blicksjo hopes the "Muhammad, Messenger of God" day would help non-Muslims understand why insulting caricatures, considered blasphemous in Islam, are offensive to Muslims.

"The Swedish society as a whole does not understand how high we hold Prophet Muhammad.

"This is why they do not understand why we get insulted when newspapers print caricatures about him."