Integration of EU Muslims and Islamophobia 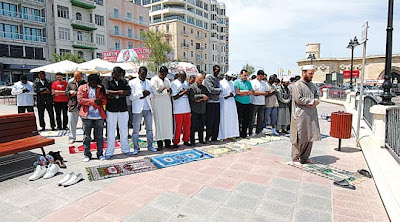 Marwa El-Sherbini's tragic death recalls many thoughts on the Islamophobia towards Muslims in Europe versus Muslims integration. For years, Muslims in Europe have been encouraged to get integrated into their communities, empower their citizenships, and contribute to their European societies.

At the time when these European calls were getting heard by Muslims, their echoes were drowned in a blizzard of obstacles spin. From the Danish cartoons crisis, French hijab ban, the sequence of attacks on European mosques and cemeteries, Fitna movie, and up to El-Sherbibi's death, European Muslims have been moving out of the frying pan into the fire.

As a Muslim in Europe who is on his way to get fully integrated into his society, such Islamophobic obstacles can not be simply dealt with. The effect of each of these Islamophobic acts on Muslims in Europe integration process would in a way "bring them abruptly back down to earth," according to one of our British Muslim readers.

Surprisingly enough, while facing such hard times ─when Islamophbia was echoing round their daily lives─ Muslims in Europe were able to get a unique benefit from each experience, share it together, and learn how to move on.

"While our fellow Europeans are putting us under fire, I am still boasting about my European identity and I am still enjoying the European democracy. Thanks to the few people supporting our rights," wrote M.K, a reader from the Netherlands.

Since its launch, IslamOnline.net's European Muslims Page has been acting as a platform for European Muslim voices. During the crisis times, we have tried to hear from European Muslims, absorb their shocking defeats, and attempt to turn them into a counter chain of positive reactions.

Furthermore, we have been very keen to engage the European Muslims in healthy debates with other parties, including the European Governments, through unique dialogue opportunities.

And now that the right-wing anti-Islam European parties are on the rise, we thought of ringing the alert bells and pointing out to the threats facing Muslims' integration into Europe hopefully a wise observer would react appropriately before Muslims' depression become unalterable.

"I am quite depressed with the attacks against my hijab that I face on a daily basis. I am not aiming at offending people with my hijab, nor do I force any one to accept my hijab. But it's my right to be accepted as a human being," said S.Elianor, one of our German readers.

A lot of questions are now revolving in minds, such as why do many Muslims in Europe believe that it is "useless" to file a complaint against the day-to-day discrimination they face and why was murder the fate of El-Sherbini ─ one of those positive Muslims who respects the legal system they are living under and who dares taking abusers and attackers to court, where she faced her death.

Most importantly, will Muslims in Europe be able to hold on to their integration and loyalty to their countries while many European actions are driving them to the opposite direction?

Europe is now in need of reconsidering its attitude towards Muslims, analyzing the reasons behind the European Islamophobia, and defending Muslims' rights, rather than working mainly on combating terrorism, extremism, radicalism or issuing anti-terror laws and warnings that are likely to target Muslims only.

On the other hand, Muslims in Europe should continue to get engaged in their societies and prove their empowered citizenships through positive actions which always speak louder than words.

Radwa Khorshid is the editor of IslamOnline.net's European Muslims Section. You may contact her at radwa.khorshid@iolteam.com.