Han Chinese Attackers should be punished 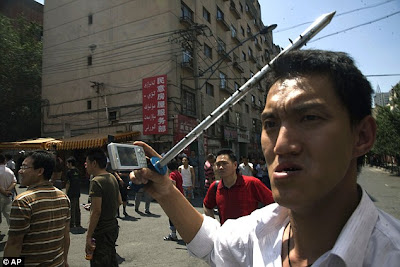 Han Chinese who took part in violent riots in China's north-west region of Xinjiang should be punished, a senior official in Beijing said today.

While state media have extensively covered the events of 5 July, when Uighurs launched indiscriminate assaults on Han, they did not report Han revenge attacks on Uighurs two days later.

"After the 5 July incident, some people in Urumqi, out of indignation over the crimes committed by rioters or sorrow for the loss of their families, did take to the streets," acknowledged Wu Shimin, vice-minister in charge of the state ethnic affairs commission, when asked about the events of 7 July at a press conference in Beijing.

The government has warned it will execute those who used "cruel means" during the unrest. At least 1,400 people have been detained, of whom the majority are believed to be Uighurs.

With Urumqi under a heavy security presence by 7 July, paramilitary police used repeated bursts of teargas to disperse the Han crowd as it headed for a Uighur neighbourhood.

But witnesses reported attacks on Uighur businesses and Uighurs told the Guardian they believed at least four people had been killed in violence that day and the next.

Wu told reporters that increasing exchanges between ethnic groups with different customs, traditions and religious beliefs meant they "may run into conflicts and disputes from time to time".

He insisted all such problems had been handled "in a proper and timely way".

He said China's ethnic policy was "conducive to unity, equality and harmony" and had nothing to do with the riots, adding: "We know those behind the violence were ... seeking the independence of Xinjiang. To this, I can clearly tell them this will never happen."

Officials have accused Uighur exiles of orchestrating the violence.

Outnumbered riot police used tear gas to try to disperse the thousands of angry protesters who flooded the capital of the northwestern region of Xinjiang.

In a sign of government anxiety about the unrest, the city's Communist Party boss Li Zhi took to the streets to plead with protesters to return home, and overnight "traffic restrictions" -- originally announced as a curfew -- came into effect to halt the violence, in which many people were injured.

Security forces intervened to stop fighting, breaking up a battle between hundreds of rock-throwing Han and Uighurs and forcing a Han mob to leave a building they stormed in a Uighur area, a Reuters reporter said. There were no reports of deaths.

But riot police stood warily by as crowds vented their anger by throwing rocks at a mosque and smashing restaurants and shops owned by Uighurs, a Turkic people who are largely Muslim and share linguistic and cultural bonds with Central Asia.

A new wave of violence hit the capital of the Chinese region of Xinjiang today as thousands of angry Han Chinese rampaged through Urumqi, many smashing up Uighur stores and seeking vengeance for Han deaths at the weekend.

The authorities swiftly imposed a curfew on the restive city in an attempt to quell what the government has already described as the worst riots since the foundation of the People's Republic 60 years ago. Police attempted to disperse today's mob with teargas as they headed towards a predominantly Uighur area, but many were still on the streets armed with whatever came to hand: wooden staves, iron bars, metal chains, nunchuks, shovels and axes.

Rioters smashed Uighur restaurants, threw rocks at a mosque and threatened residents of Uighur areas, although moderates in the crowd attempted to restrain them.