Islam saved Hamza from the Streets 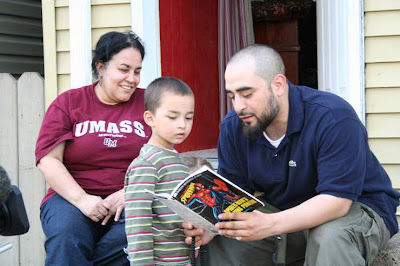 Jason Pérez always believed he would end up in jail, and he did. But instead of doing time as an inmate, Pérez went to prison to try to change the lives of the incarcerated.

Mr. Pérez is the subject of “New Muslim Cool,” a documentary from Californian filmmaker Jennifer Maytorena Taylor that follows Mr. Pérez through the streets of Pittsburgh’s North Side and Allegheny County Jail as he uses religion to help men get themselves off the street and away from drug dealing. “Nobody is doing drug dealing prevention,” said Pérez.

Ms. Taylor said she was attracted to Mr. Pérez’s story because, “I often choose stories about people responding constructively to bad situations,” something that Mr. Pérez is shown doing frequently in the documentary.

The 32-year-old was born in Brooklyn, N.Y., but spent most of his adolescence in Worcester’s Plumley Village, where he eventually became a drug dealer. Then his life changed forever. “I converted to Muslim right in the middle of Grosvenor Street,” said Pérez.

Jason Pérez was now Hamza Pérez. His Puerto Rican family supported him, but were unfamiliar with the religion. “When he became Muslim, I was shocked,” said his mother, Gladys Pérez, a Worcester resident. “I was like, oh my God, it’s a different religion. We are Catholic! But then he showed me the Koran, and it’s just a religion, like any other.”

After his conversion, Pérez’s drug dealing days were over. He started working at the Worcester Youth Center, where he spent much of his time as a teenager, and according to his mother, he would go out every morning and feed breakfast to the homeless on Main Street.

At the age of 20, Mr. Pérez decided to add another weapon in his fight to keep kids off the street. He started making music with his brother Suliman and eventually formed the hip-hop duo M-Team. Mr. Pérez sees their music as “basically an alternative to a lot of the garbage that’s out there now. We talk about everything from global political issues to the high rate of incarceration.” However, his music is one thing that Mr. Pérez prefers to keep separate from his immediate family and his second wife, Rafiah. “I don’t want my kids to see me as a rapper,” says Pérez , the father of five children with another one on the way. “I want them to see me as a dad and a father figure.”

His mother has mixed feelings about her son’s music. “I like some of it, and some of it I don’t like. Some of it is too rough, too much violence, but some of it is welcoming.”

Shortly after his foray into music, Mr. Pérez decided to move to Pittsburgh to help build an Islamic school as well as a mosque named Light of the Age. One focus of the film is a 2006 FBI raid on the mosque, and the shockwaves it sent through the Muslim community. Mr. Pérez, however, holds no resentment toward the FBI. “They have their job to do, and we don’t really mind because we don’t do anything. They can watch us all they want, we don’t feel like there’s a problem with that.”

Filming began in 2005, and took three years, according to Ms. Taylor, who directed and produced the documentary. This is her 12th film, and a change from her usual documentaries that typically focus on Latin-American culture. “I didn’t know very much about Muslims, actually I knew nothing,” said Taylor. “I’m not religious, but I gained a lot of understanding and respect for those who live their lives around a faith.”

Mr. Pérez was eager to work with Ms. Taylor to clear up misconceptions about the Muslim faith. “I wanted to show America a different face of Islam. Working with (Ms. Taylor) made it easy,” he said.

Since filming concluded, Mr. Pérez has continued to preach to both Muslim and Christian inmates at the Allegheny County jail in Pittsburgh every Wednesday. Though it’s been 13 years since Pérez lived in Worcester, he hasn’t forgotten what the city means to him. “Worcester had a big impact in changing my life. Working at the Worcester Youth Center had a big influence on the man I am today,” he said.
Posted by Zafar Khan at 18:23

Email ThisBlogThis!Share to TwitterShare to FacebookShare to Pinterest
Labels: Converts