Sewage and Raw Sewage for Gazans 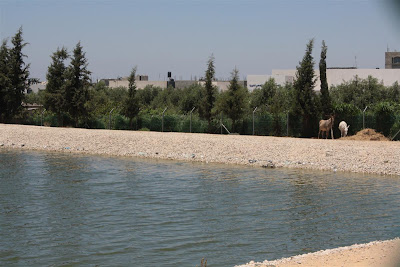 ~~~~~~~~~~~~~~
"My children have been suffering from intestinal worms, every time we take them for a medical check-up we find out that they are infected," said Rafiq Abu Hashish, a father of 11 in the Um Al-Nasser village in the northern Gaza Strip.

"This will be an unending situation, unless the problem of these sewage lagoons is totally solved," he continued.

A Village Fed Up

Um Abdul Rahman, an elderly woman, complained of the spread of diseases among little children, saying that they are no longer able to tolerate such complications, especially since her village is located very near to the border lines with Israel.

"Last night, we took a 3-month-old baby to the clinic, as he had continuous vomiting and diarrhea. We are also suffering from the spread of insects and mosquitoes," she complained.

Hassan Abu Rashed, another village resident, talked about a number of problems he and his family have been facing.

"The water here is polluted; we are forced to buy water from outside the village. We can not dig wells here because of the spread of these lagoons,” he explained.

“With the installation of the water treatment plant, we hope our situation changes. Therefore, we call upon all concerned bodies to take care of us. Life here is becoming increasingly unbearable."

Describing the many health complications that the villagers of Um Al-Nasser suffer from, local clinic physician, Dr. Mohammad Yaghi revealed that 80 to 90 percent of these villagers suffer from various health problems and infections caused by the foul smelling sewage lagoons.

"In addition to these diseases, we face some other problems, particularly in winter, such as upper-respiratory tract infections among children, which are sometimes viral or bacterial. There are also cases of Asthma as a result of the foul emissions from the sewage lagoons around us," explained Yaghi.

According to the Coastal Municipalities Water Utility in Gaza, the problem of these sewage lagoons has existed since a few decades ago. Sewage of the northern Gaza towns of Beit Lahiya, Beit Hanoun and Jabalya, is being pumped into the lagoons of the Um Al-Nasser village.

"We have recently been hearing that concerned municipal bodies intend to transfer these lagoons to another area, but this is not the solution, as all of these health problems will then be transferred to the new location," he continued.

Manal's dreams of a vacation were not a luxurious summer camp or a first-class resort, but a dip in the water on the Gaza beach, regardless of pollution risks.

"It's not that bad if the sea is polluted and someone gets sick," the 10-year-old Gazan girl told Agence France Presse (AFP) Friday, July 3.

"Exams are over and we want to have fun like other children."

In one of the world's most populated area, 1.6 million Gazans are facing risks of serious illnesses and infections from the polluted sea.

Affected by Israel's blockade and ban on pipes and spare parts necessary to repair Gaza's sewage system, thousands of cubic meters of raw sewage water are dumped every day straight into the sea.

However, trapped Palestinians have no choice but to go to the polluted water to feel like normal people.

"I promised to take her to the sea after exams," Manal's mother Um Mohammad said.

Israel has clamped a siege on the Gaza Strip since Hamas was voted to power in 2006.

It further tightened the blockade and closed Gaza's crossings to the outside world after Hamas seized control in 2007 following clashes with Fatah rival.

The humanitarian catastrophe created by the siege was further aggravated after Israel launched a deadly war in December, killing 1,400 people and wounding 5,450.

For Gaza fishermen, the sea was not a dream of a vacation. It was a livelihood.

"The sea is very polluted," fisherman Ismail Rahmi said. "Even the sand is polluted."

Local authorities list the harbor as among the most polluted areas along the coast.

Every day, some 20,000 cubic meters of untreated wastewater is dumped into the sea, according to Munzer Shiblaq, the head of Gaza Strip's water authority.

Another 40,000 cubic meters of wastewater is dumped after being only partially treated to standards well below those considered acceptable for water piped into bathing or fishing areas.

"The problem is all the more serious as the most polluted zones are concentrated in the Gaza City area, where the demographic density is highest," Shiblaq said.

Doctor Juma Saqaa says the situation is even worse, warning of risks of deadly diseases.

"(Risks of) severe illnesses that could lead to death, such as meningitis, can be transmitted in polluted waters," Saqaa said.

But the warnings could not dissuade Palestinians from braving water to dip in a polluted sea as their only choice left.

"I can see the sewage water, but what can I do," asks Mahmud Diab.

"I get itchy and an ear infection each time I swim, but that doesn't stop us from coming here to swim and have fun."