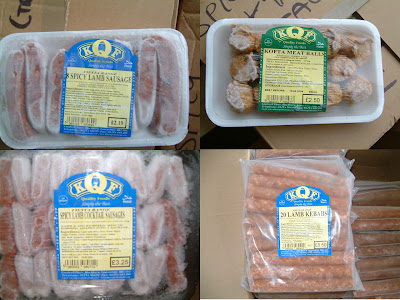 The arabic word Halal means lawful. In the Holy Quran, Allah commands Muslims and all of mankind to eat of the Halal things. Among the many verses of the Quran that convey this message, here are a few:

O mankind! Eat of that which is lawful and wholesome in the earth, and follow not the footsteps of the devil. Lo! he is an open enemy for you. (2:168)

O ye who believe! Eat of the good things wherewith We have provided you, and render thanks to Allah if it is (indeed) He Whom ye worship. (2:172)

Eat of that which Allah hath bestowed on you as food lawful and good, and keep your duty to Allah in Whom ye are believers. (5:88)

When one first reads the above Hadith, it appears to be non-controversial and simply stated to honor a strong and blessed Muslim woman. However, a vegetarian reading it might have trouble accepting the fact that the Prophet himself (SAW) elevated a meat dish to such a high rank among foods.

On the other hand, vegetarians would be pleased with a Hadith related by Yahya that states that the Prophet (SAW) said, “Beware of meat. It has addictiveness like the addictiveness of wine” (Malik). In this Hadith, it seems that meat does not hold such a high rank, after all; rather, it appears to be among the worst foods we can consume.

The general consensus, amongst the Prophet and modern health experts, is that we should eat meat – at least in moderation – and, while it certainly can become “as addictive as wine,” it holds a high rank amongst foods as long as it is eaten in moderation. Therefore, we can conclude that the best health is enjoyed by those who “Eat of the good things We have provided for your sustenance, but commit no excess therein" (Qur’an, 20:81).

For years, they have boasted of the health benefits of their leafy diets, but now vegetarians have the proof that has so far eluded them: when it comes to cancer risks, they have the edge on carnivores.

Scientists said that while links between stomach cancer and eating meat had already been reported, they had uncovered a "striking difference" in the risk of blood cancers including leukaemia, multiple myeloma and non-Hodgkin lymphoma between the groups. The study looked at vegetarians, fish eaters and people who ate meat.

There is a lot of problem with Beef in North America. Sometime back I posted about the Halal Chicken Scam in UK.

This is from an old post but probably still applicable:

North American Muslims have in recent years seen the number of Islamic-oriented food stores double in number. Drive down Dundas Street in Mississauga, Canada, or take a stroll through Dearborn, Michigan and you will see nearly hundreds of halal food and meat stores festooning the area. New Jersey in 2000, for example, became the first state to pass a consumer protection law that specifically deals with issues of halal food. The law established guidelines that sellers and distributors must follow when labeling foods as halal.
Living an Islamic way of life, it seemed, was becoming easier in North America.

That perception may have been shattered by a series of events in late May, which until now were virtually undiscovered and kept under wraps.

Many Muslims are in fact not even aware that halal classification, according to the Quran, goes beyond merely monitoring the proper method of animal slaughter.

In accordance with strict Islamic law and guidelines, a slaughtered animal is considered halal when its feed is also considered halal; feed therefore plays an important role in halal classification. Feed for animals must be from a vegetable source; no meat feed is allowed.

Furthermore, the now popularly-administered growth hormones are not allowed because they are made with pork-based material. The prevalent method of stunning should be avoided. Blood must also be fully drained from the slaughtered animal.

Sheikh Ahmad Kutty, a Canadian Islamic scholar, says that the issue of proper feeding of livestock never occurred to him or other Islamic institutions prior to the BSE outbreak.

"This issue provides a challenge for us Muslims to ensure that our Islamic standards are enforced not only in slaughtering animals but also, even more importantly, in the way they are bred and treated," he told this writer.
Kutty charged that feeding is a central issue and should take precedence over other matters of contention regarding what may be considered halal.

"[Feeding] is far more crucial and important from a shari'ah point of view than the customary issues often raised by the Muslims such as machine slaughter versus hand slaughter; stunning or not stunning or whether one can eat what is slaughtered by people of the book (Christians, Jews, and Sabaeans)," he explained.
California-based Ahmad Sakr, professor emeritus of Food Science and author of "Understanding Halal Food" and "A Muslim Guide to Food Ingredients" recently told soundvision.com that some halal meats may actually not be halal at all, primarily because of what the animal is fed.

"Islam dictates that if an animal has received meat and/or blood while it was halal, it becomes haram and in order to become Halal you have to put that animal in a quarantine area for 40 days before you slaughter it to make it Halal," Sakr said.

Have Muslim communities taken any steps to monitor feeding practices?

"This is beyond our control, it is a government issue and they regulate feeding practices," says Ehsan Sairally, Canadian representative of the Islamic Food and Nutrition Council of America (IFANCA).

I would advise people that they eat meat only in moderation and eat from the Halal vegetables and fuits of Allah's creation which you know for sure are halal and helps your health as well.
Posted by Zafar Khan at 19:31