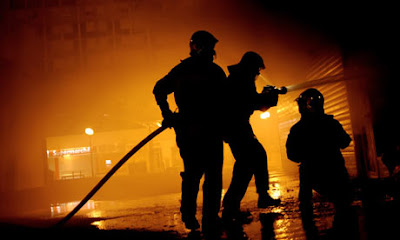 France has been busy banning Hijab in Schools and now banning Burqa in public. The reason for this being that it wants to integrate all different sections and societies. How will it change the fact though that the majority of white people look down at the immigrants or the non-whites. Maybe it could adopt a compulsary scheme that there has to be a non-white in each family by law;)

French riot police firing teargas and plastic bullets have struggled to contain three nights of rioting and arson by youths on suburban estates in the Loire, amid protests over the death of a 21-year-old in police custody.

High-rises in Firminy, a small town bordering countryside on the outskirts of Saint-Étienne, saw running battles between police and youths in the early hours of this morning after Mohamed Benmouna, a local supermarket cashier, was taken from his police cell in a coma and died in hospital.

Benmouna, who had been arrested on extortion charges, died on Wednesday. Police said he attempted to hang himself in his cell and fell into a coma. His Algerian family, sceptical of the official story, have filed a lawsuit to establish the circumstances of his death and whether police violence was covered up.

The local state prosecutor, Jacques Pin, said a postmortem confirmed Benmouna died of suffocation and his body showed no trace of violence or police abuse. But he said video surveillance equipment that would normally have filmed Benmouna's cell was not functioning properly. The police inspectorate has opened an investigation.

For three nights, youths have taken to the streets of Firminy to riot over the death, burning local shops, torching dozens of cars and stoning police, despite repeated pleas for calm from the family. Last night the family and 200 locals staged a peaceful sit-down protest outside their block of flats. But later groups of youths began torching buildings and cars and stoning police. The local bakers, chemist, tobacconist and hairdressing salon were razed. Two hundred riot police were brought in to control rioters with teargas and plastic bullets. Six arrests were made.

The Benmouna case has reopened France's festering sore - the dire relations between police and youths of immigrant descent on suburban estates. The case has echoes of the 2005 urban riots triggered by the deaths of two teenagers trying to escape from police in Clichy-sous-Bois, a Paris suburb. In November 2007, the death of two boys in a collision with a police car sparked violence and rioting in the Paris suburb of Villier-le-Bel, as youths railed against what they said was widespread police injustice.

Abdelkader Benmouna, Mohamed's father, who will lead a silent remembrance march tomorrow told reporters that he wanted to know how his son had time to make a noose in his cell. "Where were the police during all that time? That's the question, that's where I'm looking for the truth."

The case comes months after an Amnesty International report warned that France routinely failed to investigate police brutality including racial abuse, excessive force and unlawful killings. The study, which said the majority of victims of alleged cases of police brutality were from ethnic minorities or foreigners, confirmed an earlier United Nations warning of "allegations of persistent discriminatory behaviour" towards certain ethnic groups by the police.

The report focused on specific cases of alleged brutality, including cases of men of African or north African origin who died after alleged ill-treatment. In one case, a Malian, Abou Bakari Tandia, was stopped by police for an identity check and taken to a police station where he fell into a coma in his cell and later died from multiple organ failure. Police said he inflicted the injuries himself.

The French police union Alliance denounced the rioting in Firminy, rejecting accusations that officers at the police station could have been responsible for Benmouna's death.