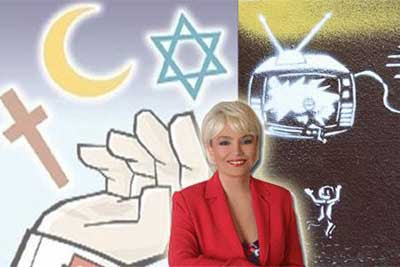 It sounds like the beginning of a joke: what do you get when you put a Muslim imam, a Greek Orthodox priest, a rabbi, a Buddhist monk and 10 atheists in the same room?

Viewers of Turkish television will soon get the punchline when a new gameshow begins that offers a prize arguably greater than that offered by Who Wants to be a Millionaire?

Contestants will ponder whether to believe or not to believe when they pit their godless convictions against the possibilities of a new relationship with the almighty on Penitents Compete (Tovbekarlar Yarisiyor in Turkish), to be broadcast by the Kanal T station. Four spiritual guides from the different religions will seek to convert at least one of the 10 atheists in each programme to their faith.

Those persuaded will be rewarded with a pilgrimage to the spiritual home of their newly chosen creed – Mecca for Muslims, Jerusalem for Christians and Jews, and Tibet for Buddhists.

The programme's makers say they want to promote religious belief while educating Turkey's overwhelmingly Muslim population about other faiths.

"The project aims to turn disbelievers on to God," the station's deputy director, Ahmet Ozdemir, told the Hürriyet Daily News and Economic Review.

That mission is attested to in the programme's advertising slogans, which include "We give you the biggest prize ever: we represent the belief in God" and "You will find serenity in this competition".

Only true non-believers need apply. An eight-strong commission of theologians will assess the atheist credentials of would-be contestants before deciding who should take part.

Converts will be monitored to ensure their religious transformation is genuine and not simply a ruse to gain a free foreign trip. "They can't see this trip as a getaway, but as a religious experience," Ozdemir said.

The programme, which is scheduled to air in September, has been criticised by commentators and religious figures for trivialising God and faith.

Mustafa Cagrici, provincial head of the state-run religious affairs directorate for Istanbul, said: "I don't find it right to discuss religion in such environments."

Others may see the show as fuelling a widespread intolerance of atheism in Turkey, where a large majority profess a deep religious belief despite the state's officially secular character.