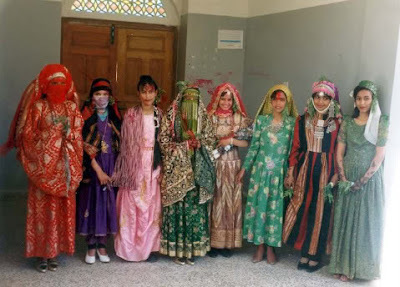 SANA’A // Following demonstrations on Sunday against a proposed law that would set a minimum age for marriage, hundreds of Yemeni women held a counter protest yesterday outside Yemen’s parliament building in support of the legislation.

The participants in the protest, organised by civil society organisations and women’s rights groups, carried posters demanding the protection of childhood by establishing a minimum age for marriage.

“No to the abuse of childhood, prevention of happiness and usurpation of life,” one poster read. “Setting an age for marriage is a legal, humanitarian and developmental necessity,” said another.

Among yesterday’s protesters was Nojoud Mohammed Ali, 11, who obtained a divorce in 2008 after her father married her off to a 30-year-old man when she was only nine. “I went to ask the parliament not to touch the law that sets the marriage age at 17 years,” said Nojoud.

“We have presented to them signatures from all over the country. Children like me should be protected and should go to school.”

The parliament voted last year for an amendment to the civil status law that stipulated that parents who marry off their daughters before the age of 17 and sons before 18 could face a year in jail or be fined US$500 (Dh1,800).

Some conservative MPs who had opposed the legislation said it was against Sharia. The draft measure was sent back to the Sharia committee in the parliament for review. It recommended that no age for marriage be set, according to Mohammed al Hazmi, an outspoken MP who is against a minimum age for marriage.

A delegation of 50 protesters met yesterday with Yahia al Ra’e, the parliament speaker, who set up a committee to negotiate with the MPs opposed to setting an age for marriage, according to Hooria Mashhoor, the vice chairwoman of Woman’s National Committee, a government agency, and a delegation member.

“I feel happy about the rally as it brought together all women activists regardless of our differences. There is a consensus among all of us that a minimum age for marriage should be set. We have got one objective to strive for,” Ms Mashhoor said.

“The speaker of parliament named a committee to sit down and talk with the MPs who repealed the minimum age article. He suggested that the committee can discuss with these MPs that the marriage age remains as it is but the fine on parents violating it can be removed. Some of the delegates, however, refused. We will see what comes up,” she said. “We really need a strong political will to pass the draft law.”

Nafissa al Jaifi, a doctor who heads the Supreme Council of Women and Children, a government agency that has strongly supported the law, said that from her experience child marriages “increase the proportion of maternal mortality at birth”.

Before North and South Yemen united in 1990, the minimum legal age for marriage age was 15 in the North and 16 in the South. After the unification, it was set at 15 years.

The civil status law was later amended and the minimum age was abolished “without any justifications and no restrictions were set”, according to a letter women’s rights groups sent Sunday to Ali Abdullah Saleh, the president, urging him to intervene in favour of a minimum marriage age.

The legislative debate followed the highly publicised plight of Nojoud, whose story and that of Fawziya Abdullah Youssef, a 12-year-old Yemeni girl forced into marriage and who died delivering a baby, fuelled the movement in favour of a minimum age for marriage.

More than half Yemen’s girls are married before they reach puberty.

A study carried out in 2008 by the Gender Development Research and Studies Centre at Sana’a University on early marriage in Yemen said 52.1 per cent of girls are underage when they wed, compared with 6.7 per cent of boys.