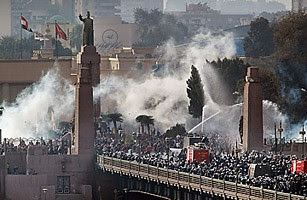 The Prophet Muhammad (peace be upon him) said:

Allah’s Apostle said, “Whoever has oppressed another person concerning his reputation or anything else, he should beg him to forgive him before the Day of Resurrection when there will be no money (to compensate for wrong deeds), but if he has good deeds, those good deeds will be taken from him according to his oppression which he has done, and if he has no good deeds, the sins of the oppressed person will be loaded on him.”

Allah's Apostle (Sallallahu 'Alaihi Wa Sallam) said, "A Muslim is a brother
of another Muslim, so he should not oppress him, nor should he hand him
over to an oppressor. Whoever fulfilled the needs of his brother, Allah
will fulfill his needs; whoever brought his (Muslim) brother out of a
discomfort, Allah will bring him out of the discomforts of the Day of
Resurrection, and whoever screened a Muslim, Allah will screen him on the
Day of Resurrection."

Email ThisBlogThis!Share to TwitterShare to FacebookShare to Pinterest
Labels: Hadith