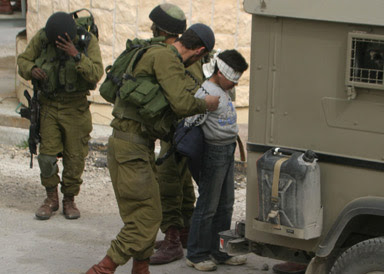 With more than 300 Palestinian children being held in Israeli prisons, human rights groups and Palestinian officials are increasingly concerned about the actions of the Israeli military.

The Israeli group B'Tselem said that security forces had "severely violated" the rights of a number of children, aged between 12 and 15, who had been taken into custody in recent months.

The family of one 13-year-old boy from Hebron who was arrested on 27 February by a military patrol and detained for eight days have brought a legal case against the authorities. The teenager, Al-Hasan Muhtaseb, described how he had been interrogated without a lawyer late into the night, forced to confess to throwing stones, made to sign a confession in Hebrew that he couldn't read, jailed with adults and brought before a military court. He was only released on bail eight days later, after considerable legal effort by several human rights groups. As he had signed a confession, he still faces a possible indictment for throwing stones – a charge that usually brings several months in jail but carries a maximum penalty of 20 years' jail.

Although most international attention focuses on diplomatic sparring in the Middle East, it is cases such as this teenager's arrest that are the reality for Palestinians living under Israeli military occupation. The surprise about the teenager's experience is not that it is exceptional, but that it is a common occurrence.

As of the end of February, 343 Palestinian children were being held in Israeli prisons, according to Defence for Children International (DCI), which took up the Muhtaseb case. Israel routinely prosecutes Palestinian children as young as 12 and the Israeli legal system treats Palestinians as adults when they turn 16, but Israelis become adults only at 18. Ill-treatment and torture of Palestinian children are "widespread, systematic and institutionalised", DCI said in a report last year.

Al-Hasan Muhtaseb was arrested early in the afternoon as he and his 10-year-old brother Amir were walking home through Hebron, in the occupied West Bank, after visiting their aunt.

"Two soldiers came to us and told us: 'Come over here.' We went to them," said Al-Hasan, a slight boy, neatly dressed, who barely looks his 13 years. "They took my brother and I don't know where they took him. I was sent inside the station and I never saw him after that."

They were detained separately. Amir was released later that night, deeply traumatised. "He was in a very, very bad psychological state," said his father, Fadel Muhtaseb, 45. "He had wet himself. He was terrified." The boy said he had been held with his eyes covered by a hat in a room where there was also a dog, which he could hear panting.

Al-Hasan was interrogated at an Israeli military post in Kiryat Arba, a Jewish settlement in Hebron. "I was asked: 'Did you throw stones? Did you hurt the soldiers or hit their vehicles? How close were you to the soldiers? Why were you throwing stones?'," he said. Eventually he had admitted throwing stones, although in an interview last week Al-Hasan said it was untrue: on that day he had not thrown stones, although earlier in the week he had.

He had been made to sign a statement in Hebrew, a language he doesn't speak or read. He was blindfolded and taken to Ofer military prison, where he arrived at 3.30am. "There were no other children," he said. "I was afraid." Three days after his arrest he appeared at a military court. But his father, who works as a tiler, could not afford the 2,000 shekels (£350) bail. "My father told them he couldn't pay this much money," said Al-Hasan. His father, who sat next to him through the interview, burst into tears.

Last Sunday the boy was freed under a bail arrangement in which his father faces arrest if his son does not appear at the next summons. "Even if he were throwing stones, he is only 13," said Fadel. "They treated him like a terrorist. They claim they are democratic and human, but they are not."

The Israeli Defence Force defended the arrest, saying Israeli troops were acting to prevent violence. Both boys are now incontinent and Amir has been hospitalised. "He wakes up in the middle of the night screaming," said Fadel. "We try to comfort him, but he's getting worse and worse."

The Palestinian Authority highlighted the case of the two Muhtaseb brothers, saying Israel was breaching international law and has recently seemed to take a stronger stance against the more routine challenges of the occupation, including the effect of the West Bank barrier. Israeli security forces have warned of a broader crackdown if the protests escalate.