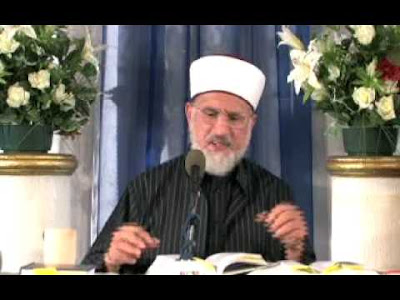 
Dr. Tahir ul-Qadri’s fatwa against terrorism might actually have an impact. It is comprehensive, direct, and does not dodge any issue. It has come at a time when there is very strong abhorrence for terrorism, specially in Pakistan, and it will strip terrorists of what little legitimacy they might be still enjoying in the eyes of Muslims who fear that Islam is under attack by Western powers.

Dr. Qadri is a prominent mega-Imam who enjoys a large popular following. He also happens to be well ensconced in the traditional Islamic heritage. His is clearly a loud voice of the hitherto silent majority. Those who are engaged in extremist violence and those who sympathize with them belong to a more recent salafi trend. This trend is a recent transplant in South Asia and fortunately does not have deep roots in the region. Dr. Qadri and his large following constitute the mainstream of Muslims in Pakistan and in the Pakistani diaspora. In principle they should be able to prevail easily over the extremist voices now causing such turmoil in that land.

Dr. Qadri’s 600-pages fatwa is essentially an encyclopedic compilation of the fiqh of the use of force. It basically accumulates all the various jurisprudential positions advanced by Muslim scholars and jurists of different schools and provides a comprehensive overview of the various normative and ethical limitations that derivatives from Islamic sources have placed on the legitimate use of force.

There is nothing new in Dr. Qadri’s tome and that is a good thing. He is not advancing new interpretations of Islamic sources, nor is he trying to reinvent the wheel. His contribution is to show that not only does Islam prohibit terrorism, it condemns the terrorist to hell. He also shows how Muslims have long held suicide as a forbidden act. Islam has always done this from the beginning. The collection of the various opinions of classical scholars too demonstrates the extent and depth of Islam’s prohibition of the use of force against civilians, against women, and against children.

The extremists and their sympathetic scholars, I am confident, will not be able to produce a document that could trump Dr. Qadri’s Fatwa. The extremist scholars in the Muslim world have relied basically on two elements to advance their radical agenda. One, they have exploited the widespread theological illiteracy of Muslims to advance out of context and unprecedented new interpretations and justifications for the principle of Jihad to legitimize their crusade against the West and its allies. Two, they have benefited from the anger that Muslims have been feeling against the various military attacks and occupations by Western armies of Muslim lands in the past two centuries. Add to this the endless suffering of the Palestinians, Iraqis, Afpak civilians at the hands of Western forces and you begin to comprehend why so many of the Muslim youth embraced the un-Islamic interpretations of Islamic sources by radicals clerics.

Is Dr. Qadri’s Fatwa a magic bullet that will erode all anger, frustration and resentment; certainly not. Will it engender a widespread loathing for the use of terrorism as a tactics, most certainly yes, if it is given sustained attention by the media. In Pakistan, Dr. Qadri’s reputation, the growing anger against terrorists for their indiscriminate violence against mosques and against Muslims, will all combine to give the fatwa a chance to marginalize the extremists. Hopefully their supporters will either rethink their politics or at least abstain from openly and actively supporting the culture of violence.

The author and his institution also hope that the perception held by some in the West that Islam is the cause of terrorism will be corrected. I am however less sanguine about this. Those in the West who argue that moderate Muslims are not opposing terrorism or those who insist that terrorism is a consequence of Islamic values are motivated by political interests and are clearly Islamophobic. They will not change their mind. However those who are still unaware that most Muslims condemn terrorists and that there is nothing in Islam that supports terrorism may perhaps become enlightened as a result of this fatwa.

This fatwa is a good thing. It will advance the cause against terrorism.