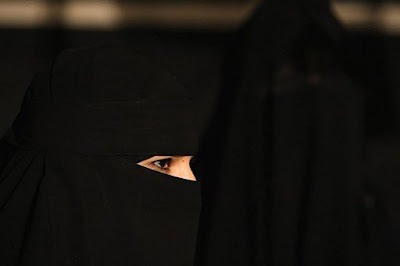 DUBAI — A Saudi housewife's bold poems which blast "evil" extremist fatwas by Muslim clerics have earned her death threats but could yet win her a 1.3-million-dollar poetry contest on Emirati television.

Ahead of Wednesday's finals of the "Million's Poet" aired weekly on Abu Dhabi state television, the poems have put Hissa Hilal, who wears a traditional head-to-toe black "abaya" cloak and veils her face, in the spotlight.

If on March 31 she is announced the winner, she will walk away with the grand prize from the competition, which draws masters of bedouin dialect poetry, known as Nabati, which is highly appreciated by Gulf Arabs.

But Hilal has drawn the wrath of Islamist conservatives in her country after criticising its strict segregation of the sexes and blasting fatwas that reject an easing to allow women to take on jobs that are currently for men only.

The Saudi mother's loud opinions have resulted in death threats on Islamist websites like Ana Al-Muslim, an online forum known for posting messages from Al-Qaeda, the Saudi daily Al-Watan said.

A participant in the forum even asked for her address, in an apparent threat to kill her.

"Of course, my husband, my family and I are afraid," she told AFP, adding that she has not been contacted directly with threats.

Hilal, who has not been to university, said that through her poems, she wants to "fight extremism, which has become a worrying phenomenon."

"A few years ago, society was more open. Now, things have become heavier. Some men do not even shake hands with female family members as they did in the past," she said.

In her poem entitled "The Chaos of Fatwas," which she has recited during the popular televised competition, she boldly charged that the "evil comes from those fatwas."

She compared their authors to "monsters wearing belts," an apparent reference to explosive belts worn by suicide bombers.

The contest's panel praised Hilal's courage for expressing her opinion "honestly and powerfully," giving her the highest score of last Wednesday's round at 47 out of 50.

Videos of Hilal's recital of the poem are available on the Internet.

The poem was seen as hitting out at Saudi cleric Abdul Rahman al-Barrak, who issued a fatwa last month calling for those promoting a mixing of the sexes in education and at the workplace to be put to death.

Hilal said, however, that she was not referring to Barrak's fatwa in particular, but said that she was "against the idea of killing a human being because of his beliefs."

She considers the mixing of men and women at work "a necessity for daily life."

"We are always told: haram," or prohibited, she lamented. "This dangerous extremism is no longer limited to Saudi Arabia and the Gulf, but has spread to other countries like Egypt, Jordan and Syria."

Radical Saudi clerics were infuriated when the reform-minded King Abdullah inaugurated in September the kingdom's first mixed-gender university, the King Abdullah University of Science and Technology, on the Red Sea coast.

"Saudi Arabia has made great strides over the past five years" to improve women's status, Hilal said, praising the "courage" of the Saudi monarch.

In an attempt to prove his commitment to improving the status of women, the king appointed Norah al-Fayez deputy minister of education for women's education in 2009, the first appointment of a woman to a ministerial post.

Women in Saudi Arabia must cover from head to toe in public. They are also forbidden to drive and can not travel without a male guardian, while segregation rules severely restrict work opportunities for women.