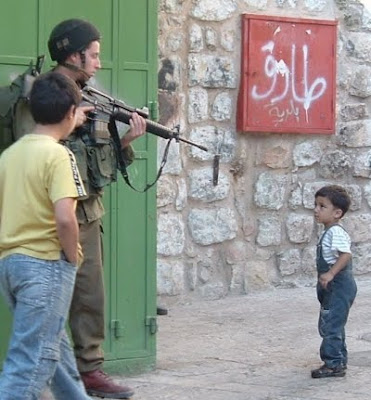 Two Israeli soldiers have been accused of using a nine-year-old Palestinian boy to check for booby-traps during last year's Gaza war.

The staff sergeants in the Givati infantry brigade have been charged with acting "in breach of military norms" by forcing the child at gunpoint to open bags they believed might be rigged with explosives.

The child, identified only as "Majd R", said he feared for his life.

"I thought they would kill me. I became very scared and wet my pants," he said in an affidavit to Geneva-based children's group, Defence for Children International.

"There were two bags in front of me. I grabbed the first one as he stood one and a half metres away. I opened the bag as he pointed his weapon directly at me. I emptied the bag on the floor. It contained money and papers. I looked at him and he was laughing."

One of the defendants, who have not been identified, said in an army radio interview he felt he and his comrade were being made scapegoats in the face of international criticism of Israel's offensive, in which about 1,400 Palestinians were killed, among them 400 children.

"They were looking for someone to blame in front of the entire world," the soldier said. "Sadly it was people who really didn't do anything.

The military said that it began its investigation of the incident in June. It said the probe was unrelated to a UN fact-finding mission which was visiting the Gaza Strip at the same time.
The UN mission, headed by South African former judge Richard Goldstone, later filed a report which concluded that both the Israeli military and Palestinian militants committed war crimes during the 22-day offensive launched on December 27, 2008.

Thirteen Israelis were killed during the war, which Israel launched in response to rocket and mortar attacks from the Islamist Hamas-ruled Gaza Strip.